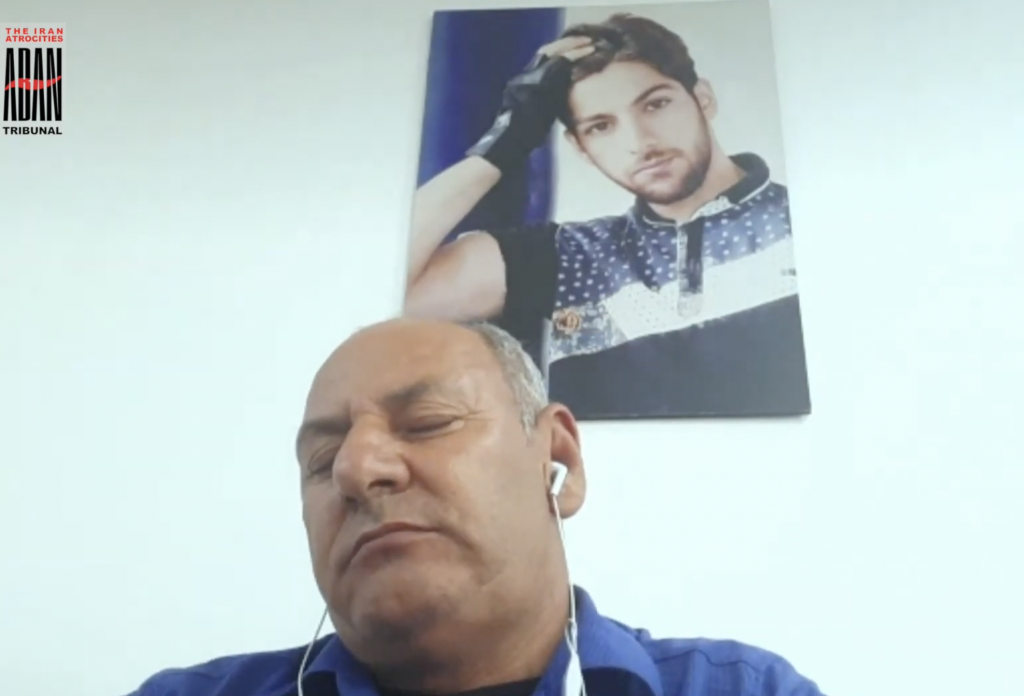 Relationship to the deceased: Deceased’s father

Farzad was the family breadwinner. He was killed on 16 November, 2019, 50 meters from the Shiraz Roundabout (Basij Roundabout) in Behbahan, which is also 50 meters away from our home. We only know that he had been at his workplace, then closed his shop at 1:00 PM and came home. I believe he heard the sound of shots from inside the house. He left the house at 1:30 PM to see what was going on. He was outside for 15 to 20 minutes, between 1:30 to 1:50 PM, when, regretfully, he was struck by a bullet in the back of his head. A girl was also struck there by a bullet, but she was only injured. I forgot her name, but I believe she was 25 or 26-years-old. Regretfully, we had no acquaintances at the place where Farzad was killed, and I heard nothing about how the bullet had struck Farzad. After two years, I still do not know precisely where the bullet hit my son. There was no camera in that area to record it so we could see.

I phoned him several times at 2:00 PM, but he did not answer. I closed my shop and went home. I called him again around 4:00 – 4:30 PM and kept calling until his phone died, but he, regretfully, never answered. I felt that something had happened to my son. I had no news about him but went looking for him. I went to the IRGC and Basijis of our area and asked, “Is one of the people you arrested named Farzad Ansarifar?” They said they did not have his name (on the list). No one provided any information. At 7:00 PM, I went to Shahidzadeh Hospital three times and returned home. I looked at the list of names, but he was not there. I went a second time, and they said they had someone whose name they didn’t know. They asked what colour T-shirt Farzad wore, and I replied, “green.” He said, “no, this one is red.” I returned home again. I sent my brother the third time. I told him to go to the morgue and see who was there. At least we would be at peace. My brother returned and said it was indeed him (Farzad).

Behbehan does not have a Forensic Medicine Department. They took his corpse to Ahvaz on the night of 16 November at 11:00 PM for autopsy and identification of the weapon from which the bullet was fired. We only heard that they put six corpses on a Peykan pickup truck and took them away. The Intelligence Ministry or the IRGC Police took the bodies. These included the corpses of Mehrdad Dashtinia, his (Mehrdad’s) brother, Mohammad Hashamdar, Abdollah Nejad and Ghanavati.

The weapons expert at Forensic Medicine said the bullet was fired from a Kalashnikov. The bullet hit the back of the neck and exited from the top of the lip, from below upwards. Only the IRGC and the Basij fired weapons; this is clear from the films.

The Governorate of Behbahan phoned us on 18 November and said: “Come tonight and take your corpses home.” We did not go; they brought them. They did the planning and delivered the six corpses at different times; they gave each to someone at some place. They returned the corpse of Abdollah Nejad at 8:00 PM. I believed three corpses were buried in one cemetery at 9:00 or 9:30. Hashamdar was buried in one cemetery, and the Dashtinia brothers in another.

We coordinated with the Governorate of Behbahan. Mr Zamani Asl phoned us and asked us to go there at 11:00 AM on 19 November. They gave us two hours to bury the corpse; they did not give us enough time. They handed over the corpse at the Behbahan cemetery. When we came to Rezvan Cemetery in Behbahan, the corpse was already there. Several plainclothes Intelligence officers handed over the corpse to us and said, “Do not make a show, do not chant slogans; bury the corpse and do not create any problems for us.” We did not do anything as we did not want the corpse to lie on the ground; we had no choice but to comply and do the burial quickly. They had brought the corpse at night but had not informed us. They had carried out all the tasks, and the only thing left for us to do was to lower the body in the grave. I wanted to bury the body in the plot of Janbazan and the martyrs. Before taking possession of the corpse, I went to the Martyrs Foundation (to plead with them), but they said, “since he was a rioter, he is considered a political activist, not a martyr.” They did not accept my plea.

At a very early stage, probably after ten days, we went to the Justice Administration of Behbahan and complained, but nothing has been done so far. We have gotten no results. As soon as we had a case filed, they invited us to the area’s Intelligence Office, which is for the police force. They asked us about our complaint. We said, “first you find the person who fired the shot and hand him over to us”; we wanted the murderer of our boy. They said they would follow up the matter, that they would pay the blood money, but would not consider anyone a martyr. We said that we were only looking for the murderer in the first place. Their behaviour was neither insulting nor nasty.

About ten days had passed when several persons came to us from the IRGC, from Ahvaz and Behbahan. They did not say anything in particular. The Leader (Khamenei) ordered them to win our hearts.

We spoke to the media from the very beginning. My daughter’s and my own interview were broadcast. The Intelligence Ministry contacted us and said, “Why did you speak to them? What did they do for you?” We said we did not want them to do anything. They threatened my daughter and told her: “If you speak out, we will imprison you. Do not get in touch with anyone. Do not contact anyone outside of Iran.”

We were able to hold the mourning ceremonies relatively easily up to the 40th Day. But for the anniversary, they harassed us a lot and did not let us do anything. When our children and we appeared in cyberspace a little bit, IRGC Intelligence and the so-called “national” Intelligence created problems and roadblocks for us. For the anniversary, the Bebehan security council held a meeting; I attended it. The Governor and the commander of the police were there. They said they would not allow more than ten people to go to the cemetery. I replied: “My family members and children are no less than 20 people. We all go there every day. If we are limited to 10 persons, we will not hold the anniversary at all.” As there was a limitation, we did not hold the anniversary ceremonies in the cemetery. We held it at our home on a limited scale because of Coronavirus. They harassed us over the notice of the memorial service. We had written in it that we could not hold the ceremonies at the cemetery for certain reasons. The security council asked why we had written: “for certain reasons.” They told us to write “because of Coronavirus.” We replied: “No, it is “because of certain reasons, not Coronavirus.”

The people of Behbahan once again assembled for protests. Before that, my daughter appeared in cyberspace. They issued several warnings. The night of the demonstration, my daughter was not in the area where people had assembled; she was in a park. Suddenly, they arrived from the police station, arrested her, and took her away. She was detained in Ahvaz prison for seven days. After that, they harassed us every day for one thing or another; they threatened to put us in prison. The threats came mostly from the Intelligence Department of Behbahan. They summoned us to court several times, and we complied. They said they would hand out a 15-year prison sentence for my daughter. They threatened us to keep quiet. Now she is free on bail. No verdict has been issued. I have two stepbrothers, and they arrested them. The Intelligence Ministry threatened me several times and asked me to stop my stepbrothers. They harassed us a lot this last year.

The word martyr was inscribed on Ghanvati’s tombstone, one of the three persons buried in the Behbahan cemetery. They objected to it. They ordered it to be removed and covered it with sealing wax.

They harassed us a lot during this last year. My daughter was summoned by the court and the Intelligence Ministry, and they arrested my brothers. One of them is still detained after 17 days.