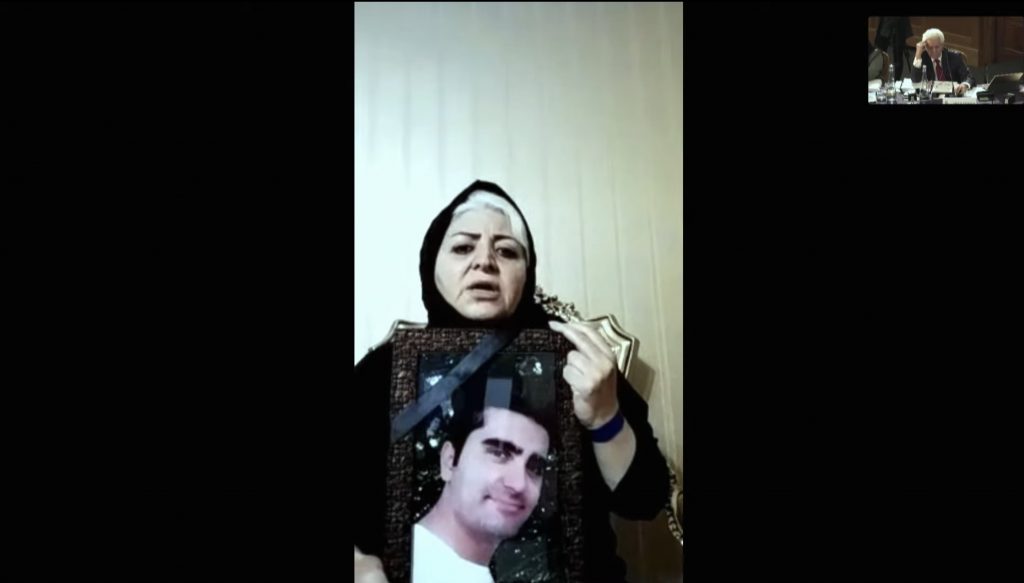 Relationship with the deceased: mother

Type of testimony in court: Public

My son loved peace, tranquillity, and the environment and was a vegetarian. He was an electrical engineer, a scholar, a poet, a writer, an informed, educated, humane athlete and a sports lover. My son was dignified and had many outstanding qualities that any young man could possess.

Pouya and I had the means to endure the gas price increase. But this was the continuation of thousands of oppressions we endured over forty-something years. The sudden rise in the price of gasoline was the last straw for us, it pushed everything over the edge. When the president suddenly appeared on television and said he did not know, I felt disrespected and violated. As an Iranian, I saw that the government did not value me.

I was heading home on November 16th. I got stuck in traffic for three hours and finally got home. I called my son and told him to come home for lunch; he said, “my project in the workshop will take some time. I’ll be back in an hour or two.” Pouya came home at four or five o’clock in the afternoon. After eating, he said, “Mom, there’s a lot of commotion outside. Protests are ongoing. I want to participate. Would you like to come with me?” I told Pouya, “I’m ready; let’s go. I, too, have objections and will participate.” I told Pouya that we’d go on the condition that we do not let go of each other’s hands. I wrapped my hand around my son’s arm. I did not want to be separated from Pouya under any circumstances. We were empty-handed and just chanting. About 10,000 people had gathered in our area. There was a lot of noise. People chanted, “Death to the dictator.” Everyone was there to protest for their right to bread, water, and freedom.

About an hour to an hour and a half into the protests, tear gas was fired, and unfortunately, I unwittingly raised my hands to my eyes. I felt a burning sensation in my air passages and lungs. I closed my eyes. For a moment, the crush of the crowds on the street made me lose Pouya.

Then I saw a body being carried in the hands of the people. People shouted, “I will kill, I will kill, the one who killed my brother.” Suddenly, I realised that I was looking at my son’s body. I looked in shock and saw that the person they were carrying was my son and had been shot. I could not believe my eyes. At that moment, I shouted, “My son, my son.” This scene will never be erased from my eyes.

Then, we delivered Pouya to the hospital. I thought he had been injured. The bullet that had hit him in the head had taken my sweet Pouya’s life in the very first moments. They took my son’s right to life away from him for neither sin nor crime. He had only protested the oppression of forty years and the high price of gasoline. The high cost of gasoline was a spark to drive me, my son, and many other Iranians to the streets. Their response came in the form of a bullet, shot directly into my son’s head.

I saw the military forces, the special guard unit, and the assailants of the disgraceful government of the Islamic Republic that night. I saw guns in their hands. However, I never imagined that these weapons would be used to murder Iranians. I thought it would be a show to intimidate the protesters. I never thought my son would be shot in the head with these guns. I thought the bullets were warning shots. I had never heard or seen a simple protester in the protest’s first hours be fired at and shot. They shot people in their heads, chests and, as they admitted, their feet.

The day after Pouya was killed, I felt extremely unwell. I had no idea what was happening. Pouya’s fathers and uncles oversaw the details of the wake. They took me to Beheshteh Sakineh with them. They said today was the day of the internment. I was afraid to attend that ceremony. I could not muster up the energy. I went to Pouya’s room and sat on his bed. I pleaded with Pouya himself to help me through this. I said, “Pouya, it’s a difficult day today. Help me to be able to attend your wake.” My brother even said, “Sister, let us not go; it’s much too difficult.” I firmly told my brother, however, that we must participate. We went to Beheshteh Sakineh. We sat and cried until evening.

We were one of the first families to show the courage, determination, and gumption to bring this deliberate assassination at the hand of the degenerate and filthy government of the Islamic Republic to the attention of not only the Iranian nation but the world. We were not afraid of what would happen to us, whatever issues and problems we would have to deal with.

On December 22nd (2nd of Dey), three days before the 40th day memorial of my son’s death, Pouya’s father called and invited people to attend. They (the authorities) then asked us for information. They tried very hard to dissuade us. We were interrogated and threatened. We never agreed to refrain from holding the memorial. Because holding and participating in the memorials was the right of the (Aban) November victims.

On the night of the 22nd, they raided our house. Around half past midnight or 1 a.m., about fifty people entered our home with axes, daggers, and weapons. They came with the camera and filmed us while our hands were handcuffed. They blindfolded our eyes. They searched our whole house. They very rudely grabbed photos of my son off the wall. They tore down the banners on the wall. They took my son’s laptop, hard drive, and diary. They took away my journal and all the tools that they thought belonged to Pouya. They confiscated his identity card and death certificate. Eleven members of our family, both Bakhtiari and Shirpisheh, were arrested and taken to prison that night. We could not attend my son’s 40th-day memorial.

We did not have the right to see our interrogators. They blindfolded us and took us out of the cell. We only heard the voices of the interrogators. The interrogator told my daughter, “Just imagine that I was the one who killed your brother”. He just said it bluntly, vulgarly, and shamelessly.

After we were released, we were summoned several times to the security and intelligence department. They kept telling us, “It was the protesters and dissenters who killed your son. Or other people; some criminals killed him.” My son never had an enemy, these are fantasies they have fabricated.

After our release from prison, we were constantly threatened. We were constantly given ultimatums by phone. Officers raided our home and confiscated our phones. We are frequently detained and imprisoned. We become a security threat. We are constantly being told, “the charges against you are very serious.” I simply do not know why my son’s murder would make my crime so serious? In which society and in which country is seeking justice a crime?

Pouya’s father has been imprisoned for one year plus the two years since Pouya’s intentional murder by the Islamic Republic. He is already in solitary confinement. He is forbidden to receive or make calls and forbidden to have visitors. He is being asked to drop his demand for justice. He refuses. Pouya’s father was arrested at his brother’s house. Officers stormed in, brutally arrested him, and put him in a car. I think they put him in the car’s trunk so that he was not seen. There was no news about Mr. Bakhtiari for seventy days. When my daughter was worried about her father, she called to ask how he was. The intelligence officer told my daughter, “Ms Shirpisheh’s charges were also serious. We will come and take your mother as well.”

For what crime were our children killed? Other than wanting answers to our inquiries about why our children were killed, what is our crime? Every time the agents call, they say, “we are on our way, right now, to re-arrest you.” We have no fear of arrest. I am one hundred percent right, as Pouya’s mother, Manouchehr Bakhtiari, his father, and all the mothers and fathers whose children were killed innocently in the protests. Why were young people who did not protest and were simply passing by or returning home from work or shopping killed?

The fate of Manouchehr Bakhtiari may happen to any member of the Bakhtiari family and the Shirpisheh family. I may go out the door right now and be arrested. Maybe they will break into my house to arrest me. Even Pouya’s uncle, Mehrdad Bakhtiari, is now on bail for a five-year prison sentence hanging over him. Whenever he gets a call, he is told, “Be very careful because we won’t hesitate to come and take you away at any moment.”

Seeking justice and litigation to that end is a grave crime in Iran. We began to realise this after my son was killed. I am an academic who used to go to school every day. I worked hard and focused on my job and my efforts, and then I returned home. We were not members of any party or group, and we were not active. We became guilty when we began demanding an answer to why they killed Pouya. We have been after us since then. We are under the threat of the regime and its authorities, and we don’t feel safe.

All members of Pouya Bakhtiari’s family have been banned from leaving. An arrest warrant has been issued for all family members. They have taken our mobile phones from us many times and never returned them. Even my son’s cell phone, which was the most significant and most valuable memento of my son, is in the hands of the country’s security and intelligence forces.

On the 22nd of Shahrivar (September 13th, 2021), I was sitting alone in my own house, where Pouya and I lived under one roof. Suddenly I saw four people enter the house without me wearing my hijab. When I told them to let me wear the hijab, they did not allow me to do so and went ahead and entered my house. They searched the whole house. They forcibly took my phone. They took my diary and whatever they thought was our means of communication out of my reach.

One hundred per cent and without a shadow of a doubt, this tribunal must be held. We urgently need such a court. Because in our country, when our killers are the leaders of our government, where do we make our voices heard? We have to get out of Iran. We demand the legal prosecution of the person who ordered it, the person who carried it out, and all those involved