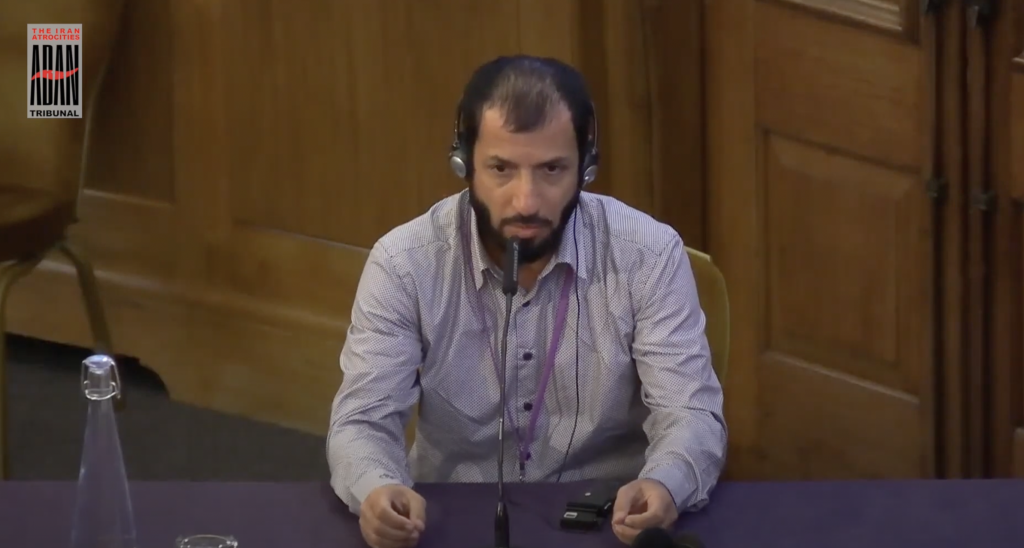 Place testified about: Village of Nasirabad-Sarbaz

After the petrol price hike, intense demonstrations occurred in our area for two days (Saturday-Sunday, 16-17 November). First, there were demonstrations in the village of Nasirabad, located in the provincial city of Sarbaz up to Parout Y-Junction. People assembled from the Pol-e Sarbaz Bridge up to Jekigour. All of us sat down (on the road) and said: “Let us block the road and hold demonstrations and not allow vehicles to pass from the second (military) post to this post.” We were about 80-90 young men preventing tankers from transporting petrol. The demonstrations lasted from sunset up to 10-11 PM.

All the vehicles that arrived belonged to the IRGC; there was not much of a police force in our area as the IRGC post is close to us. The IRGC has a big post at the border with Pakistan, which is about 45 kilometers from us. We burned tires on the road. The IRGC officers would come up a hundred meters from us and throw tear gas. Then, after the smoke dissipated, we would come back again.

(Several hours later) the police came in two vehicles. The police uniforms were dark green, close to black. Eight to nine vehicles carrying IRGC personnel in leopard-design uniforms joined it. These forces stood 70-80 meters from us and would not come forward. We threw stones at them, and they sprayed tear gas canisters at us. They wore helmets, had shields and carried batons.

We had lit fires. When two people moved a little forward, the policemen opened fire from the front. They fired shots to stop people from moving forward. A man named Abdolbaset (his actual name is protected) from the village of Nasirabad was shot in the leg, and we took him to an outpatient clinic. There was another man named Yaghoub who was shot in the hand. The bullet hit the asphalt, ricocheted, and struck his right hand. He, too, was shot by the police. I witnessed (the moment of shooting) with my own eyes. We were on the right side of the road, and they were on the left. We threw stones, and they fired shots. We made noises, and they fired shots. These two persons were shot with Kalashnikovs. They were shot on the street beside the Jami Mosque of Nasirabad, which leads to Jekigour, Chahbahar- commonly known as Sarbaz Road. The shooting occurred about 8 – 8:30 p.m. Both men were shot on the same night. When these two men were shot, all of us stood up.

It was the police that fired shots at us; the IRGC fired into the air. The police mostly threw tear gas at us. The IRGC and the police carried pellet guns and Kalashnikovs. Two police vehicles were equipped with machine guns. Only one person manned the machine gun. They wanted to frighten people. They used the tear gas but did not use the pellets. No one else was injured that night when we were there. Later, we did not hear that anyone else was injured. They did not arrest anyone at the demonstrations.

We held demonstrations for two nights in our city in the Sarbaz area. After two days, an aircraft flew over and conducted surveillance, but there were no (police) vehicles or water cannons.

There is a mullah named Abdulbaki who has set up a post in Malekabad, close to the mountains. He bothers people. He is a Baluch but works for the IRGC as a first-class spy. After the demonstrations ended, it was he who identified everyone and betrayed them. He took photographs and sent them to the IRGC’s Intelligence Department. As a result, many people were sent to jail and tortured. Their children wanted to obtain death certificates, but this man (the mullah) did not let them. Abdulbaki is commonly known as Mowlavi Barkat.

After 7-8 days, 15-20 people were arrested, spies had identified them. The spies pointed fingers at the demonstrators. They were arrested, required to post bail, and released. Then, the IRGC summoned Mowlavi Fazlurrahman Kouhi and took him to Mashhad. He had defended the demonstrators in the mosque; he had said that it was their right to hold demonstrations, that they were not hooligans but were only demanding their rights. Now he (Fazlurrahman Kouhi) is in prison; they sentenced him to 6 years.