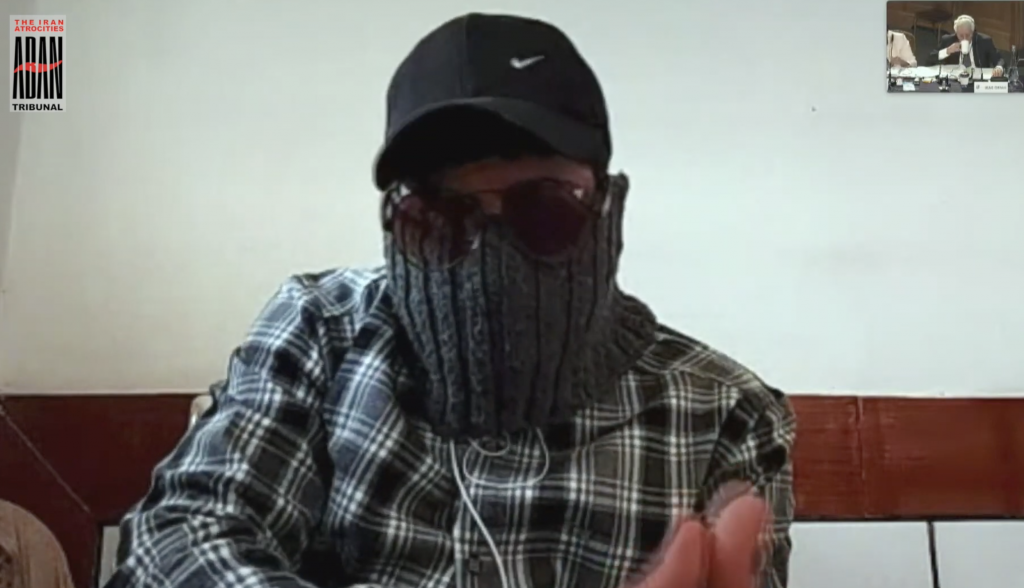 I had gone out (grocery) shopping about 10:00 AM when I saw that people had spontaneously blocked roads and avenues for protests. I went to the main square of the city; about a thousand protesters had assembled there. Everything was peaceful. There were police and several plainclothesmen in one corner of the square; the crowd was in the middle. Some of the policemen were in black uniforms; a number were in officers’ uniforms. We were not close to them in the morning. The police forces always carry weapons and batons; they are equipped. I saw nothing in the hands of the plainclothesmen. A number (of people) were in the crowd protesting, but it was clear from how they spoke and acted that they were government agents and officers. They said, for instance, do not shout political slogans. They had completely mingled with the people (all their faces were not covered). The protests continued, and I returned home about 12:30 – 1:00 PM.

People started protests in our neighbourhood about 2:00 PM and I also joined them. About three   to four thousand people were out there, and the main roads were completely jam-packed. I know four or five people from our neighbourhood who were arrested. After some time, they were released on bail. Protests continued until the afternoon on that day. They wildly suppressed the people.

I was there for about twenty minutes, a half-hour, when policemen in light green uniforms started firing straight at the people. Several police officers with Colts and Kalashnikovs were in the middle of the square and were firing at the people; their faces were not covered. After they fired 10-15 shots, I, too, was shot in the left arm by a Colt about 2 – 2:30 PM. The bullet hit my lung and reached my spinal cord. The bullet’s heat burned my spinal cord and damaged it.

I was shot from a distance of about 100-150 meters. I was one of the first people to be shot in our city. There was no ambulance on the street. Regular people took me to the hospital in their private cars. I was completely conscious. They put me on the bed; I was bleeding, but no one attended to me. There was no officer there; the hospital staff themselves offered no services. They brought roughly 10-15 wounded to the hospital. Ninety percent of them were shot in the waist or above. I was in a bad condition and lying on a bed. Those around me said they brought so and so who was shot in the jaw, or the chest, or a kidney was smashed. All of them were hit by assault bullets. One of them was young, about 15- 16-years-old. The bullet had struck him on the right side of his chest and had exited from his back, he is still alive. As I was told, I believe two of them were shot by Kalashnikovs; the same one who was struck on the chest and the bullet had exited from his back and the one whose kidney was smashed.

Then the families of the wounded started objecting and protesting, forcing the medical staff to attend to the injured. I had lost a lot of blood. They took an image of me the same day and told me about my condition; the bullet had hit my lung. They attached something to it and drained out the blood. They did not operate on me and left the bullet in the spinal cord. I was in the room; they told me that officers came and obtained information from my family members, they asked what my name was and how old I was and left. They did not see me face to face.

Apart from the hospital, my family took my images to several clinics. The doctors there said that even if the bullet were removed, it would not affect my body; they said that I did not require surgery. My attending physician had said that I could die. After two or three days, my family lodged complaints twice with the court against the police. The family kept coming and going, but the court did not care and dismissed the first complaint. The family filed another complaint but it was also dismissed. The first time the police wrote that they had not shot me; the second time, they noted that I was in the protests when I was shot, so I was not entitled to any compensation.

After one week, my family had me released from the hospital on a consensual basis and took me to another hospital. The doctor attended me there, performed surgery, and removed the bullet from my spinal cord. The surgeon who operated on me, in another city, was very hopeful. After two days, I left the hospital on a consensual basis. My family paid the bills for both hospitals. I have no insurance; the family paid all expenses.

I could not sit for about two months; I ate food while lying on the bed. After two months, I started sitting gradually; when I raised my head, my blood pressure dropped, and I lost consciousness. With time, I got used to sitting. Three or four months after this incident, I went to a rehabilitation hospital and received physical therapy there for a month. I returned home and continued my exercises; I still do them and am waiting to see what the future has in store for me. I am in a wheelchair now and can sit with incredible difficulty. There has been no progress in my physical condition. My lung has been damaged. I cannot even sneeze; if I move, I cannot walk more than a few steps, losing my breath as my lung is damaged.