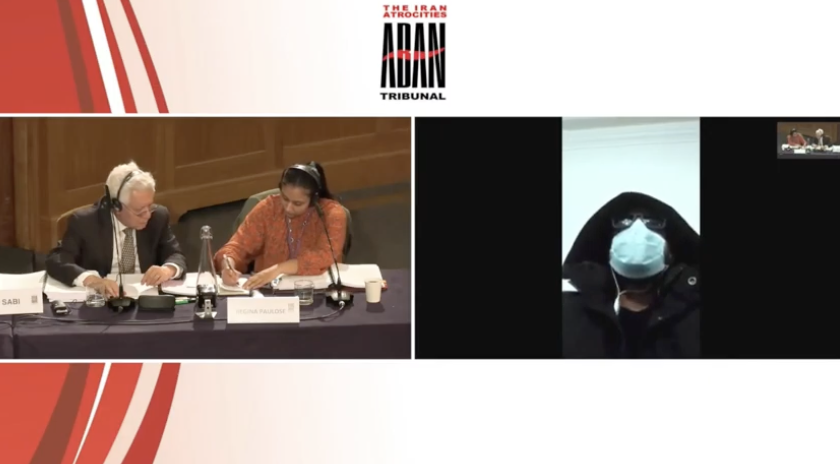 The place about which he is testifying: Rasht

Witness’s status: Eye witness to assault and battery and the killing of people, arrested

17 November, On Sunday, around 7:00 pm, I went towards a square close to downtown. The Basij and the Intelligence men had closed all the road of entry to the square. We tried to return when numerous Basijis with Taser and pepper spray followed us. Whenever they got hold of a boy in a corner, they would use pepper spray and Taser on him. I was also gravely harmed by Taser and somehow escaped from there.

Since they started beating up the people, police forces or anyone in uniform did not touch the people. All those who beat up the people or Tasered them were Basijis or the plainclothes men who are Security Guards. What I noticed was that most of the time they attacked people with pepper spray and Tasers. The public plaza was the point of contact: on one side there were the Basijis and supporters of the system, on the other side, the regular people. The plainclothes men and Basijis attacked the people first, dispersed them, and arrested many of them. They used Tasers against the old and the young alike. They fired a number of shots in the air. Many people said that they were target practice bullets but one of the boys who picked up a shell said that it was from an assault bullet. The skirmishes were very intense. Of course, I did not see anyone being targeted and shot at.

From the middle of the crowd, they fired several shots in the air from an AK-47 Kalashnikov to disperse the people. Their uniforms were black. It was clear that they were military men but had come out on the streets in plain clothes. The policemen did not interfere at all. They were just there and watched. The Basijis and the plainclothes men covered their faces with masks, or a piece of cloth or keffiyeh, mostly with keffiyeh. They beat up people wherever and however they could. They hit the glass (doors and windows) of banks, institutions, and government buildings. Then they would say that it was done by the people which was not the case. They made no distinction between elderly men and children. They would beat up anyone who they got hold of. They would seize anyone who was passing by. I was a passer-by, I had nothing to do with them. I only wanted to get out and watch them. But they beat up anyone they got hold of. They hit at the leg, waist or back; mostly, they would fire Tasers at peoples’ sides which would make them fall to the ground. They would fire on the leg and the person shot would fall on the spot and lie on the ground. Then they would haul him away, both hands tied behind the back. They would pull up the dress that person was wearing to cover his head. Three of them would whisk off that person to a vehicle and take him away.

Most of the people who were injured were the ones shot by a Taser or pepper sprayed in the eye. Come to think of it, pepper is sprayed in your eyes, you have fallen on the ground, and you are being kicked and punched from all sides. Instead of someone saying, “Stop it, enough is enough, arrest him and take him away” they would continue to beat you up until you lost your unconsciousness. Then, they would take the person away. They had come out to kill. They basically did not allow anyone to get hold of an injured person. Many ordinary people came forward to stop them: people, elderly men and women, and young people would come out of their homes to stop them but could not prevail.

They handed us over to CID at 6:00 – 7:00 am.  They seized all our belongings the next day at about 9 – 10 am. They transferred us from there to a temporary detention center. There, they said that every one of us had one minute’s time to speak to our families. I phoned my family: my wife. They harassed us a lot there. One plainclothes man would take us out one by one and ask: “Why did you come out on the street?” His basic question was why we had come out on the street, was there any problem with us. He would confuse us. If we spoke, they would tell us to shut up. They would beat us up. They would take us for an outing, tie up our hands and feet for no reason, give us a good thrashing with a baton for ten minutes, and then take us to the detention center. If we asked why they did it to us, they would laugh. It was quite normal for them. They kept us there for 24 hours without food and water. There we were together but there was no outing.

Then, they gave us several papers and asked us to sign them without reading and asking questions about them. They said: “Quickly put your finger impressions on it, sign it, and write your name, too.”

We were kept at the detention center We were referred to court for trial. They interrogated us again. They threatened that if we got arrested by the Security Guards again, we would be executed by firing squad. They repeated this threat time and time again. This was repeated by the interrogator, the prison officer in charge, and the prosecutor. The prosecutor asked me why I was on the street. I said I was a passer-by. He wanted to scare me. He said that I was filmed by the camera while setting fire to the flag and the bank. I denied it. I said, “No, I did not do it.” He asked me what I did for a living. I gave him the details. The prosecutor wanted to intimidate me, to make me think that I was done with. He said: “You made a big mistake; you have destroyed your life. You are done with. Say goodbye to this world.” They said those words to all the boys. Those who were arrested for no reason wept and cried. They were in a bad situation indeed. But misfortune awaited those who were actually protesters and had come out for skirmishes and violence.

I was interrogated a couple of time with extreme violence. Once it was at the court. But there was no violence at the court, they had just handcuffed me. One time, the prosecutor came to see me. Previously, they had beaten and tortured me. They had beaten me really badly. Then, before taking me to prison cell, they beat me again and then took me to the cell. They beat (me) with electric batons.

There was a person in the detention center who was arrested three-four days earlier. He said that he had set Khamenie’s banner on fire and then gone home. They came to his house and arrested him. The camera beside the supermarket recorded it. They went to his house and took him. The issued a bond for him in the amount of one billion and 600 million (rials). He knew that he would be executed. It was clear as day for him. I tried to soothe him. He said: “I know that I am destined for execution. But my intention was to protest, nothing else. After a couple of    I was informed that they had executed someone who set the banner on fire. They had previously made me understand my charge- it was enmity with God. I believe his name was Mosen (incomprehensible). I believe that is what he was called. He was 24-25 years old.”

The day they arrested me, they brought many people there with injuries on their bodies and faces. They would just dump them there, without any medical aid or humane treatment. They would treat them like a piece of shit.  Our family were treated badly.

The judgment handed out for me was imprisonment. We protested it, we hired a lawyer and spent a lot of money. they took us to the court so my family could furnish a security. My charges were- disturbing the public peace, skirmishes, assault and battery against the police forces and attempts to disturb the national security. Many who could not furnish a bond remained there (at the detention center).

They phoned me from an unidentified phone number of the Ministry of Intelligence stationed. They said that I was arrested in the protests of last year and they had threatened me. I said, “okay”. This happened after they had downed the Ukrainian plane.