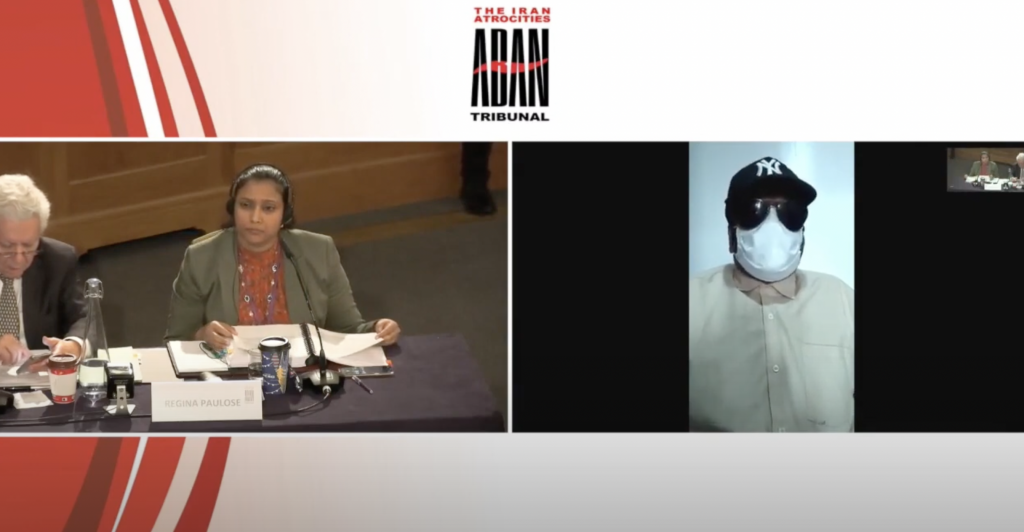 Witness Name and Surname: Withheld. Hereafter referred to as “K”

Relationship to the deceased: Deceased’s brother

We saw K in a video online on 15 November at 10:00 PM; he had fallen to the ground after a bullet struck his head and killed him. I contacted my brothers who were in that area. They said they went to the Traffic Police Station and saw that it was deserted; everyone had been taken to the hospital. When they visited the hospital, it was crowded with officers and people. My brother threw a punch at the glass, and the NOPO officers beat him up with batons; they even wanted to arrest my brothers. We arrived in Sirjan at 2:00 AM.

They had thoroughly washed and cleaned the place where the demonstrations and skirmishes had occurred, and the city was now quiet. K was shot at the Traffic Police Station in our town. The bullet struck him in the eyebrow, had opened his entire skull and killed him on the spot. We made inquiries to the shopkeepers from our neighbourhood, asking them what had happened there. They said that over 7000-8000 people had gathered. Initially, it started from the city centre and later they came to this place. The security forces engaged with the people and fired shots. They killed four or five people. People ran away, and the police carried the corpses to the hospital morgue in an ambulance. Initially, we thought that K was one of the protesters who wanted to set the petrol station on fire. When we went to his house, his wife said, with tears in her eyes, “A customer had phoned him. He went to that customer’s house after sunset. He was not protesting.”

We went to the Governorate in the morning. The Governorate had summoned all of our family the previous night. Then, the Governor said, “the security forces took the corpse to the province’s capital city night at 12:00 AM.”

He replied, “We did not kill him. We did no shooting at all. It was a protester who killed him with an assault weapon. They wanted to stage killings. We used pellet guns. We will follow up on the matter.”

He added, “He was going up the petrol station wall.”

I asked, “Do you have documentary evidence, a film or something to show that he did that?”

He replied, “We are investigating.” Then he said, “We have arrested the person recording it.”

I said, “If I see the person who has taken the film, I will kiss his feet; if it were not for his film, you would have given us no information.”

The IRGC commander was in contact with our family. He said he was on our side and would do this or that for us, but one of the boys said, “He is lying; he was shooting at the crowd. He was in plain clothes and wearing a leather overcoat. He was firing. It is possible that he fired the shot that struck K.” This is how they kept the family distracted for a couple of days. After two or three days, the family contacted the city’s Member of Parliament (Majles) and a few of their family members who worked for the Governorate. Then, they phoned the family and said K was 85 meters from the wall. The family went to the military prosecutor’s office, and there they told them that they had sent the judge on duty to measure the distance, and he said the distance was 85 meters. An autopsy would be carried out, and it would be determined which weapon killed him.

After three days, the city’s Member of Parliament made a phone call at 10:00 PM and said: “I am following up on the matter. You may go in the morning and retrieve the corpse.” When the family went there, they were harassed and refused permission to take the body. The family went to the Justice Administration. The family was told to bring a letter from the Intelligence Ministry. The family went to the Intelligence Ministry and stood there until they sent the letter. A plainclothes soldier from the Intelligence Ministry stayed with the family to watch them, so they would create no problems while taking the corpse home. They kept the family busy for one day and then handed over the corpse from the hospital morgue the afternoon of 18 November. The family took the corpse to the Forensic Medicine Department and Radiology, where they made images of his head to be studied by an arms and ammunition expert. The arms expert said that the bullet was fired by a Kalashnikov from a short distance in a direction going upwards.

After that, the family handed over the corpse to the cemetery building, where they washed the body and prepared it for burial. After that, they decided to take him to the provincial city and bury him there, but they were not allowed to carry the body in the ambulance the family hired. So finally, after much haggling, they moved the corpse towards our city at 4:00 AM on 19 November.

The officers wanted the body buried at night, but the family refused. During this period, the Intelligence Ministry contacted the family and told them they could not bury K in their city because there would be disturbances at the cemetery. The security forces had besieged the entire area. They insisted that the corpse be buried in another cemetery. The Intelligence Ministry’s vehicle, with three armed men, and the NOPO forces were behind the ambulance carrying the corpse. At one point, they overtook the ambulance to get to the cemetery earlier and control the crowd.

On the other hand, they threatened the family that if they came too late, they would not allow them to bury the corpse, and the burial would have to occur at night. We did not print the memorial service notice in our city; we did it in another town. They objected to his (K’s) name and questioned why it was printed in a red box. They even threatened the person who had published the memorial service notice for us. The family wanted a floral crown for K. The Intelligence Ministry phoned the guild of florists, and the guild had phoned all florists, telling them not to make any floral crowns that day.

Ultimately, we went to the cemetery of our city and buried K there. Family members from everywhere had come for his burial. The security officers chose the place of burial; they even put the corpse in the grave themselves. The Governorate paid the costs of burial. We did not sign anything at all. We said, “We will hold our ceremonies. If you want to maintain the city’s peace, that is up to you, but the family will not disturb the peace.”

Nevertheless, there were many plainclothesmen at the ceremonies. Security forces were on the school rooftop, waiting to shoot anyone who got up and shouted a slogan. The plainclothesmen turned back many distant relatives of K from attending the burial ceremonies. All the men from the Intelligence Ministry were present at the ceremonies. The Governor, too, participated in the burial ceremony. He used to visit our family and tell them that a mistake was made, that the Leader’s office had said that those who were innocent would be considered martyrs.

Forty days after the burial, the family went to the military prosecutor’s office and complained about the man who did the shooting and the man who ordered the shooting. However, they referred the case to the public prosecutor’s office. The cause of death was described in the death certificate as “strike by a hard object”. The family complained against the death certificate as well. The judge at the military court said that a weapon killed K, but for security reasons they could not write it in the death certificate, as adversary groups may use it. He said they knew who did it but would not disclose it to the family. He said that 700 bullets were fired that night. Probably, it was done by their plainclothesmen. The family was able to identify the man who had fired at K. He was a minor officer and fired from a police weapon. He has now been promoted to a higher rank and appointed as the chief of the police station. The NOPO forces were also there, but all of them carried C9s. They made several phone calls and said, “You have complained against the person who fired the shot, but we have not been able to find that person. So, come and put your consent on the file.” The family refused to do so. They said that they would declare the file closed. The family complained and demanded diyyeh (blood money). The Justice Administration, acting on behalf of the Governorate, paid the sum of 300 million tomans ($70,838) in two instalments as blood money. On the first day, they said they would consider K a martyr, but now they say that the Martyrs Foundation must accept section 16. The Leader’s Household said that Agha (Khamenei) has said to pacify the situation.

After the (burial) ceremonies, most pressures were from the Governorate. The Intelligence Ministry of our city and the Intelligence Ministry of Iran called the family several times. They said that they wanted to defend our rights and wanted us to authorise them as our representative in our complaint against the other side, which caused incitement and shooting. The family wanted to hold the fortieth-day ceremonies, but they said, “We have concluded at the security council meeting that you should not hold it on Thursday and instead hold it on Friday. Which date do you wish to hold the anniversary and how? How will you print your posters?” The family replied that they would do what they wanted to do.

Bullets struck several people in that area. The person in charge of the hospital morgue told the family that five corpses were brought there, and all of them were taken away at 12:00 AM to the province’s capital city. Two or three people had died at the same place where K was shot. Their families were not allowed to take possession of the corpses; the hospital staff themselves buried the corpses at night. Only then did they notify the families. They paid them the blood money and made them sign forms stating that they would not hold any ceremonies and not speak about this anywhere.