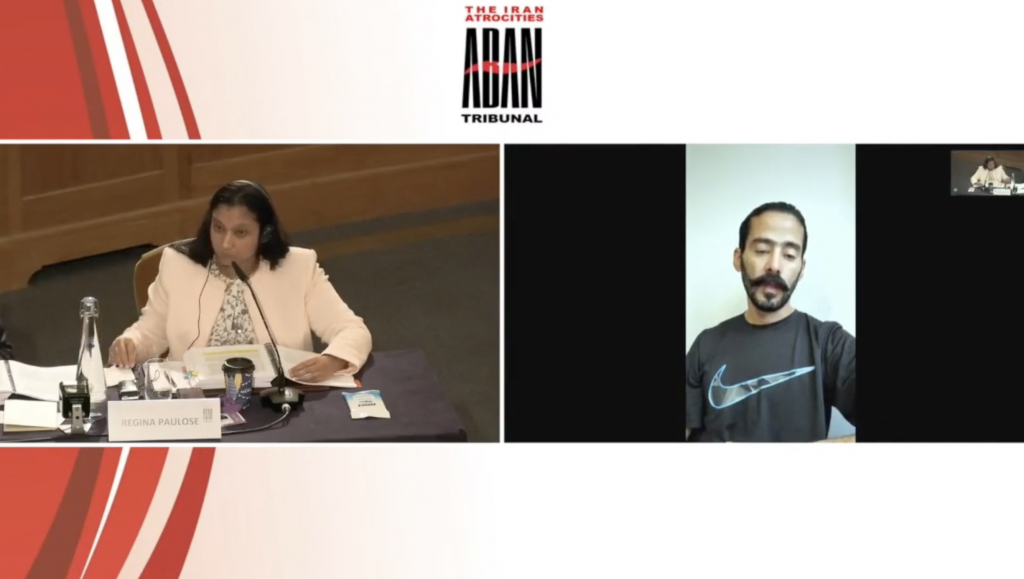 16 November, I came out of the auto workshop at about 11:00 am and wanted to go to my workplace. I came and stood in the car line-up. There were many passengers but no car. I asked those in the line why it was so crowded and why there was no car. They said that everyone had stopped their cars in the road as a protest. I went to Valiasr Avenue, in Shahryar, and saw a big crowd. About 300 people had gathered. The crowd chanted: “Not Gaza, not Lebanon, my life for Iran”, “Khamenei shame on you, let go of our country”, “long live the Shah”. The security forces came and circled them. I went to a barber shop at about 11:30 – 12:00 in the afternoon.

After a couple of hours, I came out and saw that the crowd on the main road of Shahryar had swelled to 5000-6000. I went towards the same car stop but saw neither any car nor passengers. I decided to go to Andisheh to my father’s house. While I was walking, I saw that the Special Unit arrived, and its men got off. The Special Unit men were in black uniforms and casket helmets, and were carrying very large shields, batons, and tear gas. Out of the hundred Special Unit men who came there, 20-30 of them were carrying tear gas but the remaining were carrying batons and shields. They lined up in such a way that was intimidating. Then, the number of police also increased. Initially, the policemen did not carry any weapons. I saw that there were no weapons on their waists. After I went for a haircut and returned, I saw them carrying weapons. Previously, I saw one security guard among the crowd but later I saw 20-30 of them standing in a single file beside each other. They were on guard and were carrying weapons, batons, and shields. Police force mostly carried AK-47 Kalashnikov and J-3.

I saw three guards on the other side forcing cars to move. They even broke the glass windows of vehicles and said that the vehicles must not stop. When people saw how they were hitting the vehicles, they would get in and go. After five minutes, the guards came in the middle of the public square and started to fire shots in the air to intimidate the people and to disperse them. Then, the Special Unit men attacked them from behind and the people started to run away. The Special Unit men beat up everyone with batons and threw tear gas. There was a lot of firing. When the firing started, they initially fired in the air. While I was running away, I saw three security guards in front of us firing shots. Then, while retreating, they would turn towards the people and fire shots at them. I have a video of this scene which shows the guards firing directly at the people. One person fifty meters behind me was hit on the chest by a bullet and fell. Several people gathered around the person who was hit by the bullet. When the security guards saw that person falling, they started to run to their car and drive away. While I was running, one of those guards (the video shows him) tried to get in his Pride vehicle. Its door was locked. He could not get in. He went in front of the car and returned. As soon as I came in front of him, he aimed at me. While I was putting my cell phone in my pocket, I asked him why he was firing at me. He fired at me, exactly above my knee. His weapon was Kalashnikov. There were two plainclothes men who were firing with their Colts. There was one Second Colonel in military uniform carrying an AK-47. His first shot hit someone who was behind me, and his second shot hit me. There was a man in blue windbreaker {this individual’s name is being withheld by the prosecution team}. The very first person who came after me was him. But nobody has seen him since that time up to now. If you look at the video carefully you would see me being hit by the bullet. One stone came from behind and hit the leg of the man in beige pants who was standing beside me. He sat down for one moment and then got up again. I have another video that shows, precisely, the first part of the story I am telling you. The video shows that before I got hit by the bullet, the security guard ran ten yards forward, came back towards the people and fired at them (he has sent both videos which are kept as a part of our documentary evidence).

I thought that a target practice bullet had hit me which caused such pain because he had fired probably over 7-8 shots towards me (some of) which did not hit me. Then, I sat down on the ground and saw that there was a hole in my pants and blood was oozing from my leg. Only then, I realized that an assault bullet had hit me. Then, the boys there put me in a car to take me to a doctor. I knew that if I visited a doctor or a hospital it would create a lot of problems for me when the doctor performed surgery on my leg. I got home by any means necessary, and a doctor performed surgery on my leg at home. He said: “When I left your house, I performed 11 surgeries until next morning in Shahryar, Fardis, Marlik, and Islamshahr.” One of his close relatives was killed and his body was kept at Fardis. They refused to hand over his dead body. (His relatives) wanted to somehow get hold of the dead body and bury him. They (the authorities) did not want to hand it over and demanded money. I believe they had asked for a deposit of 400 million (Iranian Rial).

When I came home for surgery. My father reported that a 16- 17-year-old boy in plain clothes, who was a member of the Basij, was standing in Andisheh, Phase 3, Azadi Square at about 5:30 – 6:00 pm. He had a weapon in his hand. He fired at another 17- 18-year-old boy who was standing beside my father’s car. The boy’s brains splattered on the street. My father also witnessed a woman being fired at, towards her chest. I do not know whether she is alive or dead.

At the time I was shot, it was about 3:00 pm when no glass had been broken yet. Nothing was destroyed and no firing had taken place. All the events leading to violence took place around 6:00 – 7:00 in the evening. After that, they started violence and setting banks on fire. It was the first protest in our city and the protests continued for three days. Only the police forces and the Special Unit men were engaged with the people up to 4:00 pm on 16 November. However, from 4-5 pm, all the Basijis were authorized to shoot at people. Friends and acquaintances who are in the Basij and with whom we spoke later, said: “They gave us permission to shoot. They said that we could use our weapons in whichever way we liked to use it, but we had to stop the people.” Several 16 to 20-year-old boys came out on the street and fired shots at anyone and anywhere they liked. Those who fired were not concealed. Then, there were those who stood on the rooftops of mosques or government buildings and filmed with their mobiles. I reckon they did it to identify the people. There were three-four Basijis on the rooftop of Al Mahdi Mosque, in Valiasr Avenue, who were filming the people.

When they fired shots at me, there was another 27- 28-year-old man whom the bullet hit on the chest. I believe he died because when my younger brother came home, he said that he heard from people that two persons were shot at Farmandari Sqaure (the same place where I was shot) and one of them died and the other was alive (which is me).

A friend of mine who works for a hospital saw that they had parked several Khavar and refrigerated Nissan vehicles in front of all hospitals and all police stations and Basij stations. Two or three police officers were stationed at every hospital. Anyone who was injured that night for whatever reasons, even if he twisted his leg, was dragged down from the hospital beds, shoved in those refrigerated Nissans, and driven away. Anyone who was arrested and taken to the police station was later shoved into those refrigerated Nissans. At about 10:00 11:00 pm when the city became somewhat quiet, all refrigerated Nissan vehicles were removed from the city and taken towards Kahrizak. She said that they fired at people’s legs, hands, chests, and heads. The bullets were fired from assault weapons, most were aimed at the hearts. The police did not allow the doctors and nurses to provide­­­­ any medical aid. She had even seen children among the injured persons. She said that they had brought many dead bodies; some of the injured people had died from excessive bleeding.

My brother phoned me the same day and said: “Do you know that the video footage of you being shot was broadcast on Manoto Channel?”  I stayed home for two or three days, because I could not move my legs at all; I was so stressed for those two or three days that I could not sleep. I expected that at any moment, the door would bust open, and they would break into my house and arrest me.

We coordinated immediately, and I left Tehran with my injured leg and the bullet that had caused infection. I rested for one week or ten days. As soon as the Internet was restored, I purchased a ticket and left Iran.

I believe it was 7-8 days after my departure from Iran when they raided our house. They took away my father and my brother and said: “Introduce this person who has been injured by a bullet and tell us his whereabouts; if you do not, we will detain you.” My father and mother replied: “This person you are talking about is our son; it is true that he has been injured by a bullet but he has left Iran.” They made inquiries from the airport and gave them my name and particulars and told them that I had left Iran 5-6 days ago. They subjected my father and brother to assault and battery. When it was confirmed that I had left Iran, they released them. I believe that the people from the Intelligence Department had taken them for questioning, they were plainclothes men. This year on the anniversary of the November Protests, they (the authorities) phoned my family to threaten them and told them not to leave their house otherwise they would deal with them accordingly.