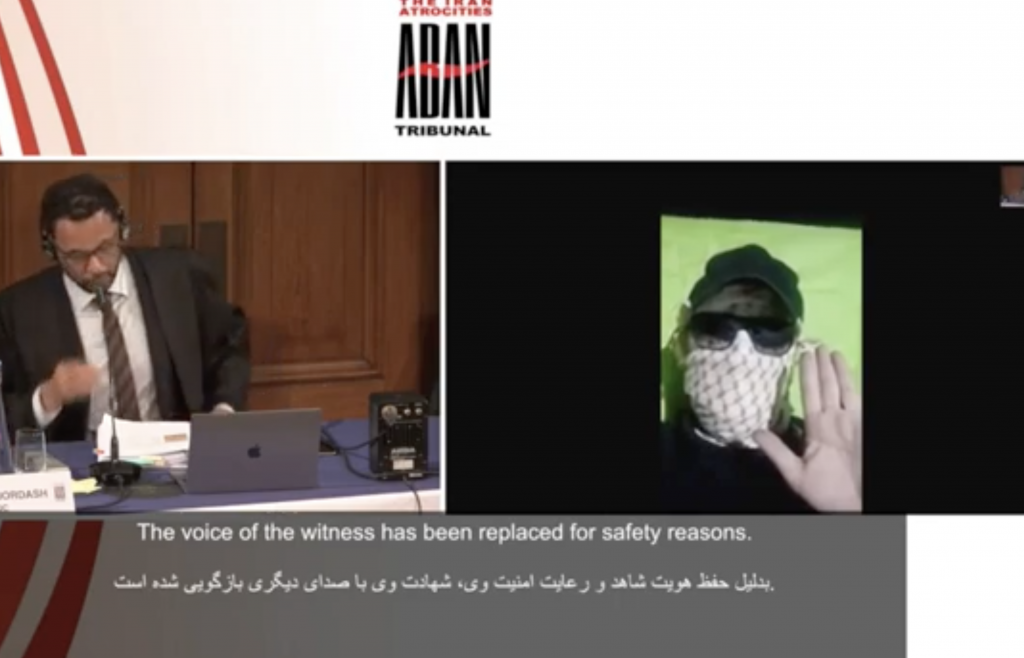 The place about which he is testifying: Behbahan

Witness’s status: Injured/arrested/witness to firing at the people

16 November, I heard shots at 09:30 am. I went outside to the beginning of Bank Melli Street. There were demonstrations opposite the City Star shopping center. There were 1500 people. Ehsan Abdollahnejad was beside us. The Basijis were far less in number than the police force. There were snipers in the uniforms of the Sepah and the Basij. Many of them covered their faces. But the faces of most policemen were visible. Mostly, the police force fired shots at us. There were two Basij men on the rooftop of City Star. Their uniforms had army uniform colours. Three of them were on the rooftop of Bank Melli; they were wearing helmets and their faces were covered. The Basijis and the police were carrying AK-47s. Those on the rooftops were also carrying AK-47s, I believe. The forces were standing 10-15 meters away from the people. They fired shots recklessly; they did not care about the elderly and the children.

The sniper on the rooftop of City Star fired shots at X (his name is reserved with the interviewer). His leg shattered. People carried him away on motorbike. Officers did not allow him to be operated on in the hospital. He was taken to Ahvaz, but it was too late; they amputated his leg.

Ehsan Abdollahnejad was shot by two bullets in his chest, from the front, at 10:00 am. I saw one bullet hitting his chest. Some boys said that the sniper on top of the City Star Building shot Ehsan with an assault (weapon) bullet. We lifted Ehsan and took him to Bank Melli Square. By the time we reached there, he had already died. After this event, people became angrier. They set Bank Melli on fire. But I am not sure if it was actually done by the people. One officer was stuck at Bank Melli. Mohammad Hashamdar went alone, put the officer on his back and brought him outside. Then, he went towards City Star. People were attacking the police force. Two bullets hit (Mohammad Hossein) Ghanavati’s leg in the front from a distance of 10-15 meters. The bullets were fired from a pistol by the chief of Police Station 11, Major Vafaie. He was a captain at that time. He was in police uniform. When Mohammad Hossein Ghanavati was shot, he got up easily and continued with the demonstration. Then, two shots were fired towards his chest. They took Mohammad Hossein away on a motorbike. But he died on the way.

They fired shots towards the legs of several people at Bank Melli Street; there was a lot of bleeding. A woman (her name is reserved with the interviewer) was shot at about 11 am, at the beginning of Bank Melli Street, with Winchester assault rifle. At about 10:30 – 11:00 am, we went towards Shiraz Roundabout. The number of Basijis increased on all four sides of the roundabout. All of them had covered their faces; the firing was intense on all four sides.

There is a Basij base at the start of Shiraz Roundabout. Most of the forces were sent from that base to fire on people. One of the demonstrators (Dashti Nia) was shot there from above on his chin. His brother came, by car, after five to six minutes. He wanted to lift him when they shot the brother in the chest. Both brothers died on the spot. There is a hotel in front of the base. I believe the sniper was on the rooftop of that hotel. Their father said that when the expert came, he told him that they were shot from above from 30 meters away. Another person was shooting from the rooftop of the Basij Base. They did not let anyone carry away the injured and the dead; they had opened bursts of fire with AK-47. I tried to lift them, but I was shot on my back with two pellets near the base by a Basiji in white-grey clothes. They fired five or six pellets on my friend’s as well.

When I saw that the firing was intense, I went towards the police bridge- opposite of Shiraz Roundabout. I saw Mr. (Farzad) Ansarifar coming there. He had a kebab shop in front of the police station. He was on a motorbike and was looking at the traffic light when they shot him precisely in the neck. He was not a part of the demonstrations. He had done nothing at all. They tried to take him to hospital, but he died on his way. Mr. Mashhadinejad was standing in front of me, he is a part of the Basij forces. They fired with AK-47 and in the middle of it all they shot Ansarifar.

(This same Mashhadinejad) shot Ansarifar’s neck from the front from 30-40 meters away. Mashhadinejad did not allow anyone to pass from there. He was just busy firing shots. Then, people fled to the reed-beds of the canal. They continuously fired towards them from the other side. I, too, ran away into the reed-beds. I went to Pahlavanan Street, close to Godbaghal. At that moment, Basij schoolboys came there and joined the fray. They were very young. They were wearing school trousers but their shirts were military- Basiji army coloured.

There were about 20-30 kids below the age of 18, carrying AK-47 in their hands, and shooting at us. One person was shot in the foot by a Kalashnikov bullet. It was about 12 pm when the schoolboys shot my friend’s leg with a Kalashnikov bullet. I took him to the hospital. Security forces were in large numbers at the hospital. (When we returned) the Baijis who had arrived were carrying batons in their hands. The Basij and police forces that were earlier on the City Star Street came forward and fired tear gas from the distance of 50 meters. The Basij mostly used pellet guns and the police used pistols. Their commanders did the firing for the most part. Four or five traffic policemen also fired tear gas and pistols. One of them was Mohammad Dehdashti, second lieutenant. A tear gas (canister) hit a woman, her head got injured and her face became bloodied.

Mohammad Hashamdar was behind me in Godbaghal. The under-aged Basijis shot him in the neck from a distance of 30-40 meters at Masjid Bordi Street. I removed my shirt instantly and put it on his neck to stop the bleeding. Regretfully, blood oozed from his nose; he had become exactly like Neda AghaSultan. We put him on a motorbike and my friends took him to the hospital, but he died on his way.

After that, they shot two persons in the leg; both were wounded. I took one of them to the hospital. They took away that wounded person.

It was around 01:30 – 02:00 pm, the demonstrations were more or less coming to an end when the people went towards Nahvi Square. There, too, the Basijis in grey uniforms did the firing with pellet guns. Then, the protesters went up to the hospital square. There, too, the Basijis did the firing. Two persons were shot in the shanks by assault bullets. I remained there until 12:30 – 01:00 pm and then went home.

The Sepah forces, 1000 – 1500 or more, descended upon the city by 8 to 10 O’clock at night, armed with weapons and snipers. In the afternoon, they were at Marahel Square in black uniforms. They had completely covered their faces. I believe they had two Berretta shotguns. Five snipers were stationed on the roof of Mr. Rahimi’s carpet shop. They were standing there to shoot anyone who participated in the demonstrations. They were in Toyota vehicles, on motorbikes, and on foot. They said that one person was shot late at night in Bidboland Square. Then I went to my shop, concealed myself and stayed there for one day.

They handed over Ehsan Abdollahnejad’s corpse one week after 25 Aban (16 November). They obtained an undertaking from his family, his family had filed a complaint. He gave consent first. His father and mother had broken down. Ultimately, they too gave their consent. Officers were stationed every step of the way at his burial ceremonies (they had made an offer to the family to declare him as a martyr). His brother put a lot of pressure on the family to do so but they did not accept the offer. They told the family of Abdollahnejad that if they gave an interview, they would be required to pay the sum of 35 million toman.

The Sepah made threats to the family of Mohammd Hossein Ghanavati that if they gave an interview (to the media), they would not hand over his corpse and the family would also be required to pay (the Sepah) the sum of 35 million toman. Mohammad Rasoulan, chief of the Sepah Intelligence, who is now retired, played a part in those threats. They handed over the corpses of Ghanavati and Abdollahnejad on the same day. They told the family to hold the ceremonies without mourning.

The father of the Dashtinia brothers said that: “They made a lot of threats to us. We wanted to bury them in Behbahan but they did not allow us. They said that we must bury them in Islamabad.” They held no ceremonies. They handed over the corpse about ten days later. When they held the memorial anniversary, 100 people were arrested.

They made a lot of trouble for Ansarifar’s family too. They set his sister’s car and house on fire. I believe they handed over his corpse together with the corpse of Abdollahnejad. His sister said that they had demanded money. I believe they wanted to bury him in Islamabad but were not allowed. The family could not hold his anniversary. They did not permit mourning. One officer was stationed at the door and arrested anyone whom he found suspicious.

Mohammad Hashamdar’s corpse was handed over after about 10 days. He was buried in Mansourieh in his own village at the family’s request. The family were able to mourn him, but it was not reported. I was told that they brought the corpse accompanied by armed men. They made rounds of the city with the corpse and said that they had killed a bunch of adversaries and aggressors.

One day after the demonstrations, I went to Nahvi Street. I saw several persons in military uniforms. One of them was speaking Arabic, and another Afghani. It was clear that they were not Iranians. Since Behbahan is close to Ahvaz and other Arab-dwelling cities, I realized that the way they spoke Arabic was not the same as the Arabic spoken in Khuzestan. Again, which Afghan would you see in Iran in military officer’s uniform.