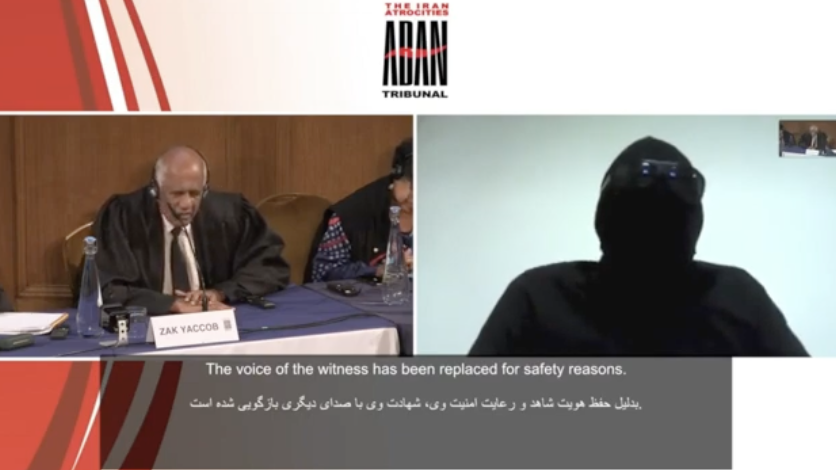 The place about which he is testifying: Baharestan, Tehran

16 November, I went outside on Saturday at 01:00 p.m. and saw that all streets were blocked from Namaz Square, Islamshahr up to Adaran T-junction itself and people had spilled out in large numbers. All of them were young men and teenagers. I saw that people were engaged with the Special Unit and were throwing stones at the Special Unit men. The security forces were in helmets with visors, black clothes, and in Special Unit uniforms. They were in the anti-riot uniforms and helmets with visors. I believe their uniforms had “Special Unit” printed on them. There were a couple of Special Unit vehicles which have a net at the back. I saw that the police and traffic police had closed their doors and left. At the Baharestan school one vehicle had turned off its engine. One Special Unit man hit its windscreen with his baton and told him to move. The driver of the 206 got frightened and moved; then the cars behind him also moved. They set Bank Mellat on fire. I accompanied by a couple of others went to (a Special Unit man) and asked him to phone the fire brigade. He said he was not permitted to make the phone call and ask it to come. It seems that he deliberately wanted the skirmishes to continue.

Then the skirmishes intensified. The Special Unit fired shots in the air by AK-47, I believe. People started to disperse. They then fired tear gas at people and they stopped dispersing. The Special Unit men got on their vehicles and motorbikes and retreated up to the police station of Baharestan. They stood in front of the police station. People were very angry. They started to move towards the police station when the forces began firing the tear gas. When they saw that they could not stop the people, they fired shots in the air. Then they started shooting at people from a distance of hundred, hundred fifty meters.

A protester was shot below the knee in front of the police station at about 4:30 – 05:00 p.m. Suddenly the boy fell beside me. I believe they had shot at him from inside the police station with a Colt. The isolated sound of Colt could be heard. We put him behind a motorbike and they took him away. When the ambulance would come (to pick up the injured) people would say that they would take the injured and hand them over to the police station.

The Special Unit also fired pellets from the front door of the police station. When it hit the wall or the ground, it would ricochet and spread among 200-300 persons. Suddenly I would see 4-5 persons holding their hands or legs. One person was hit by a pellet two knuckles below his eye; another on his head. We took two persons inside the school; their bleeding won’t stop. On the first day they shot mostly below the waist, below the knee and below the hips. The officers would suddenly launch an attack and catch those who were wounded and could not run away. They would hit twice behind the leg and the back with boots or on the shanks; they would slap or kick and would take the wounded to the police station.

17 November, I came to Adaran T-junction at 10 in the morning. We started to shout slogans and blocking the roads. The skirmishes were very intense. I believe the Special Unit went inside the police station on the second and third day and did not come out. There were the Basij and the Sepah. The Basij uniform was muddy-grey colour. Some were in muddy-green uniforms firing shots at people. Some were in homogenous dark-green uniforms; they were the Sepah, I believe. One side of the road was blocked by the security men. This side of the road was blocked by us. The Basijis would come on motorbikes with their mobiles in their hands. They would hit with batons and shout at people to disperse. They would pursue the people.

The Basijis were on motorbikes. Those sitting behind the driver carried J3 and fired shots. But I did not see anyone getting hit by it. Ten, twelve officers were stationed on the main building of the police station and on its walls and fired shots too. They were from the Sepah because all of them were in dark muddy uniforms. The remaining were below in front of the police station. They brought the Sepahis in dark muddy uniforms in vehicles and dropped them off. There were 30-40 of them. All of them carried J3 in their hands. When they got off, they fired shots in the air and threw tear gas canisters, and people dispersed. After 4-5 in the afternoon, they started shooting people with assault weapons. They opened such bursts of fire on people that my whole body trembled. Ninety per cent of them were from the Sepah and the Basij, I believe. One of my friends told me to go below the flyover as they as they were firing assault bullets. People would suddenly shout to charge the security forces and push them back. They would retreat a little bit. Then they would launch their attack by firing or with motorbikes or vehicles. They would catch those who fell down and could not run and would slap and kick them and drag them to the police station. I believe they arrested three or four persons in this way.

They fired a shot in the head of an 18- 19-year-old kid; he died on the spot. The ambulance would not come to pick up the injured; it would just pass through and go towards the officers and come back. We were frightened. We put his corpse on a motorbike; one person sat behind the corpse and they took him away. The second person was shot on his side. He was taking his last breaths, I believe. We put him too behind another motorbike. They fired at me. I ran and they fired from behind. I turned into an alley and the bullet struck the corner wall of the alley. They fired from behind. If you ran away, they would fire at you from behind. When people fled, they would come inside the alleys. Officers in dark green uniforms would come inside the alleys and start firing. Their firing was so intense that the frightened children inside the homes would start to cry. I heard firing until it grew dark. The firing ceased fifteen minutes or half hour after it became dark.

18 November, I came to Adaran T-junction at 12 noon. The skirmishes were a little less there. Two three persons would come and get together. The Basijis would come quickly and tell them to disperse. The Basijis in muddy-grey uniforms would make rounds on their motorbikes. They wouldn’t let the people to assemble at one place. The Sepah were in dark mud-coloured uniforms. The entire neighbourhood was under their control.

After two three days a friend said that three four of those who set certain places on fire were hauled away from their homes. There is Imam Reza Hospital. There one of its personnel said that on the second day they had brought 17 dead bodies by 6-7 p.m. But the hospital refused to hand over any corpse to their families. If a person was shot, he would not go to the hospital. No one trusted the hospital. If you went there, the Intelligence and the police station officers would arrest and take you away. I heard that a number of bloodied persons who came to hospital were shoved in vehicles and taken away.