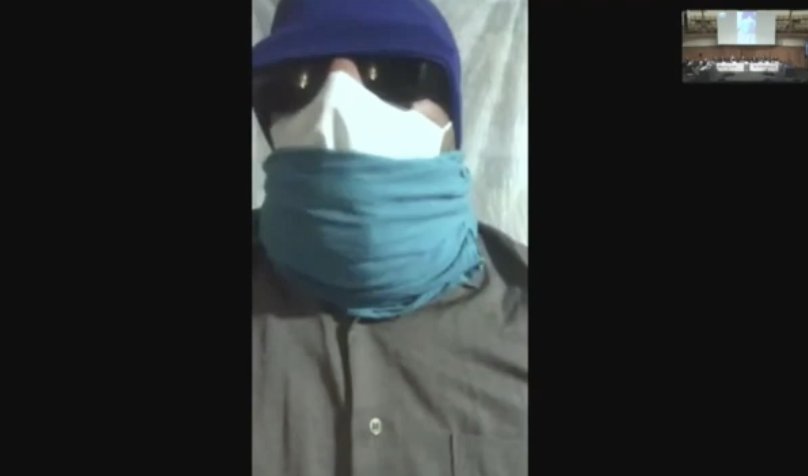 The place about which he is testifying: Sadra, Golestan Township

Witness’s status: Witness to firing at the people assembled at the place of their congregation.

16 November, Demonstrations started at 8-9 in the morning in Golestan Township, Shiraz. About 1500 to 2000 people had assembled there. It was clear that there were no forces inside the resistance base except a couple of officers. Forces were on guard duty on the rooftop of a base located at the beginning of Golestan Township. I was in Golestan Township until 6-7 in the evening.

My wife phoned me at noon from Sadra City and said that all routes were blocked, that she could not move at all, and she heard shots. Five to six hours passed, and she phoned me again and said, “The firing is getting heavier.” I went to Sadra city. The entire route was closed. I was forced to walk five-six kilometres. I could hear shooting on my way. I saw at Boulevard Sangi, Sadra City, that 1500 – 1600 people had assembled at the Basij resistance base. There were 10-12 Basij men on the street too. All of them carried batons and they were firing tear gas at the people. Their uniforms were not homogenous, they were almost grey. But their armoured cars were uniform. They had helmets and black shock-proof clothes. Some were in shoes, some in boots. All of them covered their faces. When the number of protesters increased, they went inside the Basij building.

Firing started at about 7:00-8:00 at night from the resistance base and the base in Boulevard Sangi. It was dark but one could see that five to six officers, all armed and faces covered, were standing on the roof of the resistance base. They were shooting at people. Some were snipers and some used bursts of heavy machinegun fire. The distance between the base and the protesters was less than 100 meters. All of them were armed with Kalashnikovs. I heard five or six shots and saw that they were fired from the resistance base. A 15 or 16-year-old boy fell on the ground. They had shot at his head from the front. Terrified people around him started to run inside alleys. His corpse remained on the ground. Minutes later, a Cobra helicopter flew over my head and hovered above the crowd. The helicopter door opened, and they brought out a machinegun and fired in bursts at the protesters. I could see the bullet light. They fired shots from 30-35 meters above the ground. At the beginning of Boulevard Sangi, 10-12 persons were standing beside each other and there was a large crowd inside Boulevard Sangi. I saw from a distance of 150-160 meters that about 10 – 12 people simultaneously fell to the ground (shot from the helicopter). About 100 – 120 shots were fired from the helicopter and their weapon, I believe, was a heavy machinegun. When the helicopter left, people assembled again. Some of the officers had come out. Anyone who got close to the resistance base was struck by a baton on the waist, hip, or abdomen, or they would be told to get further back from the base. I could hear the sound of ambulance.

Subsequently, I heard that the security officers brought the corpses to the basement of Dena Clinic in Sadra City. The next day, they had removed the corpses from there. They did not hand over the corpses to the families for a long time. When they handed over the bodies to their families, they forced all of them to go to their (native) cities and bury the corpses there. They were not allowed to hold certain ceremonies (hijleh) for them. Many families were threatened against granting any interviews.

When I was returning, I believe I saw the second and third helicopter come and go. It was clear that the helicopters were going over the roof of the resistance base and dropping off security forces. They would fire some shots here and there in order to frighten the protesters. I was able to bring my wife and children home with a great deal of difficulty. Then again, I joined the demonstrations in Golestan Township. I could hear the terrifying sound of machinegun fire coming from Sadra City. About 1000 protesters had assembled at the start of Golestan Township. Forces were stationed in Golestan Township only at the resistance base and the regional base. The commander of the base came out in the crowd, unarmed, in the uniform of a police officer and said, “I appeal to you not to climb up the base wall under any circumstances. We have an ammunition depot here. Anyone who climbs up the wall, we are forced to shoot him.” Seven to eight armed officers were at the resistance base. They were carrying double-barrel and single-barrel hunting guns. All of them were wearing black bullet-proof vests and light grey uniforms. I have seen those on Sepah soldiers. Then, two officers came out of the resistance base and started firing in the air with AK-47. Then they retreated inside the base. All of us dispersed at about 2:00 am.

17 November, I went to the township around 8 am. About 1000 – 1500 persons had assembled there again. Protests were held all day long and there were no security forces to stop it. The base soldiers were on guard duty at the base. I was only in Golestan Township as all the roads had been blocked. On the second day, I was out until 1- 2 am at night. A friend gave the message that one of her distant relatives was shot in the abdomen in the township by a Kalashnikov. He was 26-year-old and named Amir Alvadimehr He was transferred to a Shiraz hospital where he died as a result of bleeding. It is said that he was shot from the resistance base. Initially, they demanded money from the family to hand over the corpse. However, since a number of his relatives worked for Sepah, they were persuaded to hand over the corpse in exchange for the family’s silence. The family has a younger boy. They had pursued him on the road in the city. They warned the family against giving an interview saying that they had the boy in their control, and they would do the same to the family’s second son.

We assembled at 8:30 – 9:00 in the morning. The officers at the resistance base came out in groups of 10-12 persons and fired tear gas at the crowd. The base staff consisted of 70 to 100 officers. All of them were in black bullet-proof vests; their uniforms were different. They fired a lot of tear gas. The entire crowd ran into the alley. Many residents opened the doors to their homes and the protesters took refuge in those homes. The Basij and Sepah officers identified such homes and threw tear gas in the windows and smashed their glasses. The entire house would become filled with tear gas and the families would have to bring the children outside on the street to breathe. I saw several new-born babies who developed breathing problems.

When the suppression began, they started firing plastic bullets with Kalashnikov. They fired from a distance of less than 50-60 meters. One of my friends, standing beside me, was shot next to his eye with a practice bullet. My friend said that it was extremely painful. It was blind shooting. I saw a couple of persons who were shot in the leg, they were in intense pain. People tried to take the wounded to a safe place. There is a private clinic where the wounded were taken by the protesters. Government institutions refused to admit the wounded. The firing continued until 3:00-4:00 in the morning till they dispersed the protesters in that area. People moved from the First roundabout of Golestan Township, located in front of the gas station and the resistance base, to the Second roundabout of Golestan Township and assembled there. I was out until 3:00 at night.

19 November, The crowd assembled at the Second roundabout at 7 or 8 in the morning. Around noon, 50-60 motor bikers started straight shooting from the First roundabout and up. They would attack the crowd and fire bullets and tear gas at them.

They were not the same forces as the first and the second day anymore. All of them were on motorbikes, organized, and drove at a high speed. I believe they belonged to the Police Special Unit. Their uniform was black, they had bullet-proof vests, and all of them were armed. They carried AK-47 in their hands. Their faces were masked. They rode the motorbikes in teams of two. They fired tear gas while moving. Occasionally, they would get off their motorbikes and the second riders would shoot with Kalashnikov. They would not come closer than 50-60 meters for the purpose of shooting. I felt that they were not firing straight, that is, they fired mostly to frighten the crowd. Most of their firing was in the air. All the bullets were assault bullets because there were a couple of stone buildings and when a bullet hit the wall, the stone would crack. I heard that a couple of persons were shot in the leg, but I could not find out whether the bullet was assault or plastic bullet. A friend said that his friend was shot in the leg. They came at night and picked him up from his house. The firing continued until 10:00 – 10:30 at night. After that, we did not see those motor bikers anymore. The crowd stayed in the street until about 4:00 in the morning.

20 November, The township was entirely under the control of security forces. In every street, there were Police Special Unit black vehicles with personnel in black uniforms and forces on motorbikes. All of them carried AK-47. Some of them carried hunting guns. The demonstrations were almost suppressed in Golestan Township. I received messages from a number of friends saying that they had now started killing and showed no mercy at all. There were still demonstrations here and there in Moaliabad, Shiraz. But now, the security forces dominated.

21 November, I went to Moaliabad on 21 November. The Sepah forces, staff, and soldiers had gotten all streets under their control. They even brought personnel carriers on certain streets; they were very small personnel carriers that could seat no more than 3-4 persons. I saw one of those personnel carriers. They placed other heavy equipment on all entry and exit routes of this area.

I believe that 20-25 protestors were killed in Sadra City and one in Gwim. I heard that one person was shot and seized in the hospital and taken away.