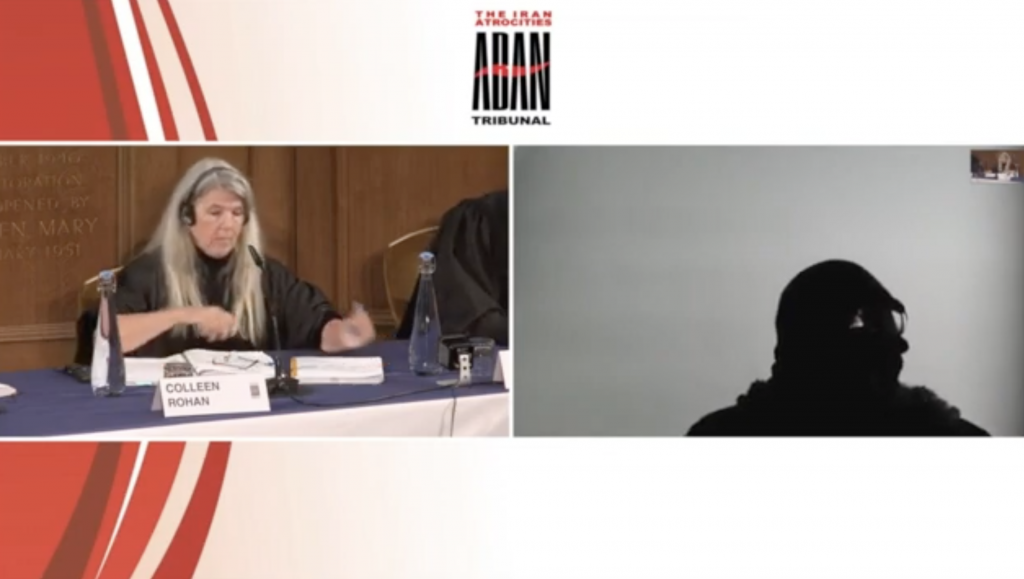 The place about which he is testifying: Andisheh

Witness’s status: Injury to self/witness to firing shots at people and the dying of a 16-year-old girl

17 November, I was in the bazaar of Andisheh at 6:30 pm on 17 November when I realized that there were disturbances, and the entire bazaar was in chaos. That night, people were in the streets until dawn without any street clashes, they were shouting slogans in front of the Basij base. Later, I learned that people, especially students, had gathered that day from 10-11 am and were holding completely peaceful demonstrations and shouting slogans.

18 November, At about 11:00 – 11:15 am, clashes started between the people and the police in Donyamali Street at Andisheh intersection towards Mallard. People damaged the Basij base. The Basijis fired tear gas at people from inside the base. People burned down 80-90 per cent of the base. There was a small room in the corner where the Basijis had gathered and were firing the tear gas from. They fired plastic bullets in people’s faces from pellet guns and the people reciprocated with stones. The forces inside the base had casket helmets, bullet-proof vests, and pellet guns. (I saw them) firing at people who were just passing by. There were mostly young people, aged 15 – 17 years, who participated in these demonstrations.

Around 1:30 – 02:00 pm, I was in front of the Basij base and a tear gas bullet hit my head causing a crack, I fell not realizing what had happened. When I came to after a few minutes, I saw that they had put me in a corner against a wall. I got up and somehow dragged myself home, attended to my injuries, and returned. I saw that the situation had worsened and they had brought reinforcements; they were wearing the military uniforms of the Sepah.

About 3:30 – 4:00 pm, we came back to the same place and heard two or three shots. No one was hurt. People attacked and started throwing stones. Slowly, the officers came out. Around the same time, the forces reinforcing them also came out. I saw their commander on the wall of the Basij base shouting orders to fire at people to force them to retreat. They fired several shots at that moment and we were forced to run inside an alley. They started to shoot with the intent to kill; the bullets were real ones. At that moment, a 16 year-old girl who was standing in a corner was hit by bullet(s) and lost her life. A sniper on top of a building was shooting with a long-distance weapon. (They were also firing from a tall building located) in front of the Basij base with a shopping center, closed at the time, on its lower level.

I saw three young men who were hit by the bullets. One 19 or 20 year-old boy was hit by a bullet in his thigh and was bleeding profusely; we learned later that he was taken to the local public health facility and was arrested there. Suddenly, we saw someone falling to the ground and shouting. Since there was no one there, people picked him up and took him to a clinic as it was the best thing to do so under the circumstances. Later, my friends told me that 20 minutes after arriving at the clinic they arrested him in front of the first alley on the right-hand side.

As far as I saw, there were many injured people. (That) officer who was firing from the middle of the boulevard was carrying, I believe, a Kalashnikov. Many of them had protective hats; some were wearing their hats.

At about 6:00 pm, I went out on the street again. They were firing recklessly. They wanted the people to retreat. We were in the middle of a boulevard and the crowd had swelled. Skirmishes began again. People had no place to go except the alleyways. When they went inside the alleys, they were attacked (by the officers). It was at about 8:30 – 9:00 pm when, it seems, they received orders to ruthlessly suppress (the demonstrations). I saw it, as they raided alleys and shot anyone who was in front of them. They shot with pellet guns to catch and arrest them. There was an old man with his daughter inside his car, at the corner of the street. They riddled his car with bullets forcing them to get out of it. They shot the old man with pellet gun from one meter away; his hand and legs were hit at many places. At that moment we attacked them, forcing them to retreat. We took those two inside a building. There was a physician there who came and attended to them to the extent they could bear. A pellet had hit the old man on his thigh from behind. (The physician) removed some of the pellet pieces from under the skin. The old man was over seventy years old. While the old man was being attended to, (the officers) launched another attack inside the alleys and started firing real bullets. they came and started hitting the doors with the butt of their guns. They cursed at us and ordered us to open the door. They fired several shots at the doors, then they broke the glass door with the butt of their guns. They started firing inside the parking areas with real bullets. One of the neighbours’ car was damaged. When we were standing on the pavement and they were firing towards our heads, the bullets used were war bullets. When they were firing, one bullet hit above the shutter of a shop and made a dent like a real bullet would. I do not know the name of the weapon, but the bullet was real. The shop was damaged. They used bullets wherever they could, whether real or plastic ones. Whoever they caught, they would hit with the baton or the butt of the gun and two or three of them would drag him away. They targeted the head. It was not important for them where they hit. Mostly, they fired towards the face and head.

When this happened, the people got frightened When the situation calmed, they went out and I do not know what happened after that. We had no choice but to return to our homes. Inside the alleys, officers were stationed. Whoever they saw, they would hit. The officers wore black anoraks. One of them was a man 30-35 years of age. The language he spoke was not Farsi at all. They yelled, “Ya Allah Ya Allah”, and fired inside the alleys and shot at people. The police had not been interfering at all since the previous day. It was the same Basij forces which had stormed there; there was no one else other than them and they had covered the entire block forcing the people to return to their homes. About 10-11 pm, the traffic had become somewhat normal, I came out. People came out and evaluated the situation in a completely normal way to avoid being identified as protesters. They walked normally on the sidewalks. It was then that I saw the sad sight. Every few steps you walked, you would see blood spilled on the ground. After that, I went to the beginning of the block, took a round and returned. I saw the municipal water trucks washing the road.

The same night of 18 November, one of them, I remember his surname was Abedini, (died). He was the one, as I later found out, who was killed on the 4th Street in the demonstrations. I know that they did not allow (his family) to put up a banner. About one month later, (his family) put up a banner with his face on it but had not written how he died.