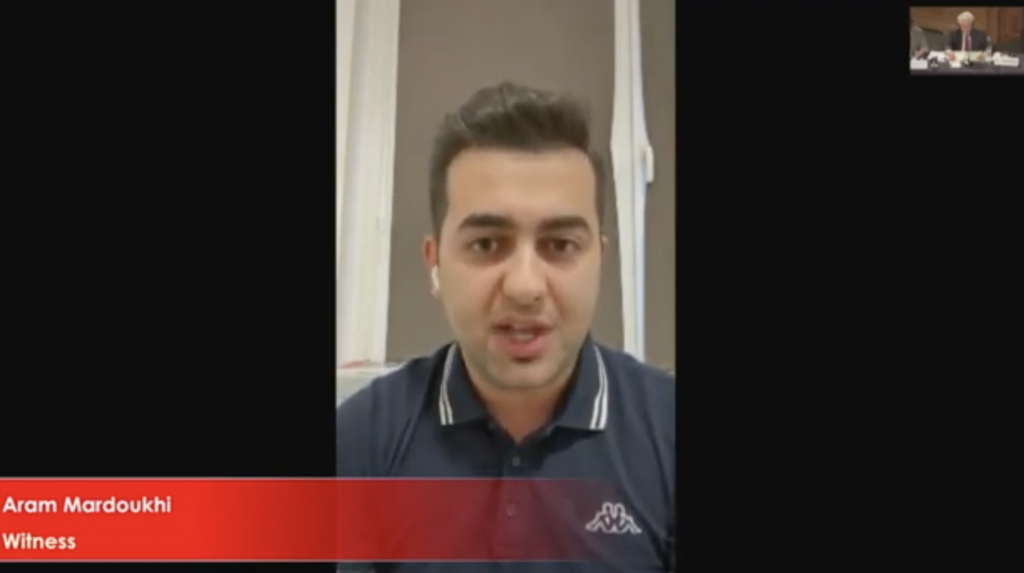 The place about which he is testifying: Sanandaj

Witness’s status: Injured; Arrested; Witness to firing at the people

16 November, Skirmishes started in Eghbal Square, that is, Azadi Square, Sanandaj, at about 10:00 – 10:30 in the morning. A number of people turned off their car engines had brought a crane and tow truck from the other side so that they could tow away a car if it went dead. There was a lot of traffic police on the street. Perhaps half the city had come out on the streets. People were just sitting and shouting slogans. The Special Unit forces launched an attack from the side of 6th Bahman Street, or the selfsame Pasdaran Avenue. The Special Unit’s officers struck with batons, precisely, in the middle of a lady’s head and broke and bloodied her head. They threw tear gas canisters in the middle of the crowd. There is a Tobacco Department around the Sanandaj Square which has a very large yard and officers are always there on alert. I have heard that Eghbal Square has a school, and the officers are always there in its yard on alert. The road behind it also has a yard that belongs to the Intelligence Department of Sanandaj. The Special Unit policemen were on alert in its yard. They brought a water cannon and colour spray vehicle in Eghbal Square. First, they sprayed hot water from the water cannon; when a few drops of it fell on my hand, they burned my hand. Then, they sprayed blue colour.

Then, I went to Ferdowsi Avenue. The Police, the Special Unit, the Relief Unit, the Intelligence agents, and the Basijis were all there. The Sepah were also there in large numbers. Skirmishes continued there. 10-20 officers would descend upon three or four protesters, would beat the hell out of them, arrest them, and take them away. I heard that the plainclothes men would go into the crowd and knife the protesters. Then, I went to Seyed Ghotb Avenue where I remained engaged until noon. The security forces had generally separated. For instance, one street was taken up by the Sepah. They launched attack together in one place. Another place was taken up only by the Special Unit.

Most of the Special Unit officers had motorbikes, guards, shields, batons, assault weapons, and tear gas. They had large water cannon vehicles. The uniform of the Sepah was panther-design and grey-coloured. They had red motorbikes. The Sepah carried AK-47s. The police force, which was the selfsame Relief Unit, had their regular uniforms – jade-green – helmets, masks, and shields. Many of them carried AK-47s. The abbreviation NAJA (the Islamic Republic of Iran Police Force) was printed on the backs of their uniforms. “Relief Unit” was imprinted on their vehicles. They carried Colts on their waists. The plainclothes men carried spring batons. The Sepah had covered their faces. The Special Unit men had helmets on and their faces were not visible at all. The plainclothes men were wearing masks. These forces, generally speaking, were present in all streets.

When I went out in the afternoon, I saw that there was chaos. The Police and the Sepah were everywhere, had taken over everywhere and were manoeuvring traffic until I came to Naboovat Square. A number of young men who had lost all patience tore down the traffic lights, charity boxes, and blocked the road to prevent the police on motorbikes from attacking. The police attacked from the other side of the street. They beat up the crowd like crazy. The Special Unit men hit people with motorbikes and cars. They would beat up anyone they got hold of with a very thick chain, with the intent to kill. They hit people on the head and face to disable and to kill them. One of them carried a very thick chain which he struck right in the middle of the head of one person. They would grab one or two protesters, drag them towards their vehicles, and throw them in the cages to haul them away. They acted like savages. I went inside the house of an old man and woman and peeped through the door hole and saw a 5- 6-meter-high wall and a young man on it. The Special Unit men hit the young man and felled him from the wall. He may not have survived. Then, they dragged him and took him away. He was probably underage. I heard from the kids of our neighbourhood that they considered that young man as good as dead. There were a lot of gunshot sounds at Sirous Intersection which is close to Naboovat Square.

Then, they said that the people were engaged in skirmishes at Kargar Square. There were at least 2000 people there. They had set an ambulance on fire there. I heard that Sepah officers were inside that ambulance. Faizabad Square, one square below, was in very bad condition. Perhaps 2000 people were there as well. As it was getting dark, I continued to hear shots until I arrived at Kargar Square. They had shot a 16 or 17-year-old boy, precisely, in front of Neyshekar Pastry Shop; his blood had spilled there. I saw that several people lifted him, put him in a Paykan car and took him away. The bullet had struck him in the chest. He was shot by a Kalashnikov. He had no life left in him; there was no blood in his body. There were the Special Unit and the Sepah men there. I believe the Sepah had shot him. All of them were carrying weapons but the assault weapons were mostly in the hands of the Sepah. Their uniform was panther-design, grey-coloured. I saw the Relief Unit in Kargar Square. I even knew one of the men in the Relief Unit. He is called Colonel Javanmard or Javanmardi. He was holding a wireless set in his hand and issuing orders: “Shoot them, have no mercy; bastards.” He was cursing at people and inciting the forces. There was another colonel, and I was standing in front of him doing nothing. I looked at him. He wanted to shoot me. He said: “What? Why are you looking at me?” By the way, I had seen the same colonel in the demonstrations of Dey 1396 (Dec. – Jan. 2018) hitting between the legs of a woman. They were so savage that the people decided it would be better to stop the demonstrations. They were really killing the people. I came back (home) at that point.

17 November, I went to Eghbal Square at 9 in the morning. There were police, Sepah, and the military everywhere. I walked through several streets and saw the banks that were set on fire. I am sure that the security forces had done it.

Then, the news arrived that there were skirmishes in Ghafour neighbourhood. I went there. The security officers were everywhere. Those who were fighting the police were no more than 20-30 persons. Then, two police colonels in regular light green personnel uniforms said: “By God, they will shoot you. They have orders to shoot. The order to shoot to kill has come. Do not stay.” Someone dropped a block from a rooftop which did not hit the police or anyone else. The military and the policemen broke the windows and doors of the house and brought that person down and beat him up so much that I felt the pain. They threw him in a Police Toyota and drove him away.

The Special Unit motor bikers came out of an alley. There was one driver on each and one person sitting behind the driver. They hit, with their batons, the shopkeepers who were standing in front of their shops and looking. Those who were behind (the drivers) would jump out and beat up the people. I ran inside a coffee shop. The Sepah were there in large numbers. Some of them were carrying batons, some were carrying large sticks. If you hit anything with those sticks, it would break it into pieces. A little further up, young men were throwing stones and these officers were attacking them. If there were a thousand citizens, there were ten thousand policemen to face them. Sound of shots coming from above could be heard. They had thrown a large number of tear gas canisters.

They were reacting so savagely that we were forced to come back to the city. One drone flew over people’s heads. The plainclothes men were assaulting protesters with batons. It was at that moment that a crowd formed and broke the windows of banks. At that moment, the Special Unit men shot from a pellet gun to a man’s eye from the distance of 5-10 meters. I dragged him by hand and brought him to Fereydouni market.

They had wounded many people; I myself saw a number of injured persons. The blood of others was on their bodies. At that very moment, the Special Unit men shot, with a pellet gun, the kid from the shop next to ours at Ferdowsi Avenue, before Enghelab Square, in front of Kafsh Melli shop. It hit his thigh. He was not at all a demonstrator. He had closed his shop and was going home. I have heard from my father that they have obtained an undertaking from his family to keep quiet and, in return, would give the family the quota of Janbaz. They have not spoken to the media out of fear for themselves, to avoid problems, and to get rid of them (Special Unit forces).

In the afternoon, close to night, the disturbances erupted in Naboovat Square. The police raided shops and arcades and created chaos everywhere. They raided our shop, causing huge losses to me. They beat up the bazaar shopkeepers. They beat up my neighbouring shop’s keeper close to death.

Demonstrations were held at night for 10-20 minutes, I believe. There were some young men in Naboovat Square. All of them were thoroughly beaten up. The Special Unit motor bikers had raided the alleys and thrown a lot of tear gas canisters. Since the alleys are narrow there, the tear gas they fired would fall in people’s homes, yards, and dining tables. They fired some shots too but they were fired in the air, people said.