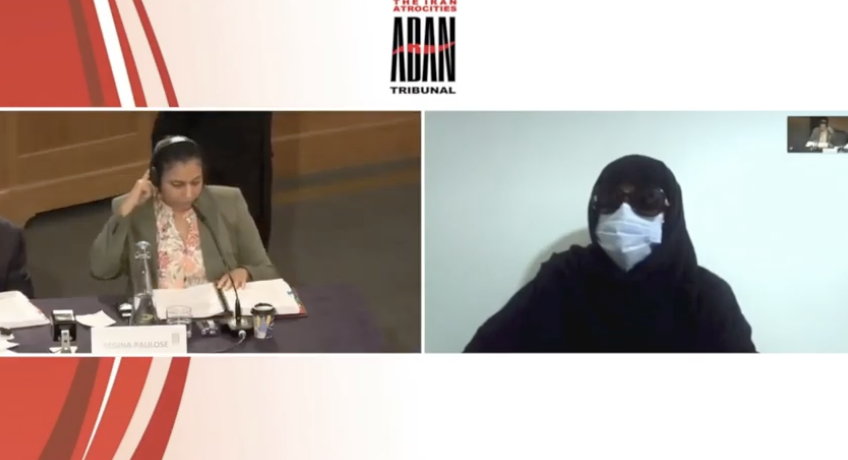 The place about which she is testifying: Withheld

16 November, I got on the bus in the morning. When I passed the square, I saw that traffic was heavy. They said that at a certain point people had turned off their vehicles and gotten off. I walked on foot, at 10 am, from the start of the city up to its end. It was too crowded. Vehicles were parked and all passengers were out. I came back home between 1-2 pm. It seemed that people had assembled on  from 9 pm onwards. I heard shots being fired occasionally from 9 pm onwards. When I came beside the window to see what was happening, I heard no noise except the sound of firing. It was happening at a distance far away

17 November, I came out at 9 in the morning. The number of demonstrators (at the first roundabout) was up to 100. They began shouting slogans and moved towards I saw a Special Guards vehicle. They were firing shots in the air and spraying water from water cannons. The officers stood at a distance of 500 meters. I saw two young boys who were injured. Some young men picked them up and went inside an alley. One of the boys, 17- 18-years-old, was shot in the leg and fell to the ground. One woman gave him her shawl to tie around the wound to stop the bleeding. The other boy, 20-year-old, suddenly grabbed his (own) hand while running. I believe, he was struck by a pellet as his condition was not as bad as the one who was shot in the leg. No ambulances or medical aid was available for the wounded. The demonstrations continued up to 3 pm. The officers only fired tear gas canisters.

I realized, from the sound of firing, at 9 pm that the demonstrations had begun. I could hear firing. Lights went off all around. Firing continued in the dark and intensified. There were over 1000 demonstrators. Officers would suddenly appear in their vehicles and people would run away. They fired from inside the vehicles and from the rooftops of buildings. I saw them moving in their vehicles and firing pellet guns. I saw a Peugeot car. I did not think that officers were in it. Later, they said that they were Basijis in plainclothes. I could not see them as it was dark, and they had completely covered their faces. Officers fired pellets at the demonstrators from the rooftops. Initially, they wanted to frighten the demonstrators. They would shoot someone in the leg or fire in the air.

The Basijis were in the Basij uniforms and had completely covered their faces with a piece of cloth. Their uniforms were mud-coloured. Most of them carried weapons and fired shots. All officers were in bullet-proof vests and had covered themselves. Most of them were in black uniforms with green underneath it. They had black bullet-proof vests and helmets. No one could see their faces. “Police” was written on their uniforms. I do not have knowledge of weapons, but it was not Colt and things like that.

We went towards the City Hall- People were throwing stones at the windows of the City Hall. Suddenly, we saw officers in black uniforms and bullet-proof vests coming towards us from the front and behind as we remained stuck in the middle. We ran away and went inside the alleys and We waited for 30 minutes. The one who was with me was struck by a pellet. She said that her hand was burning. I saw that her clothes were bloodied. I bandaged her hand and we returned to the crowd. The officers who were on the ground fired assault bullets from a distance of no more than 500 – 600 meters. I do not know where they laid in ambush to suddenly attack the people. A young woman was shot in the leg by an assault weapon People picked her up and carried her. Two persons brought a carI do not know whether they were regular people or not, but they put that girl in the car and took her away. I believe that she was struck by more than one bullet as her condition was very bad. A large number of people were wounded by pellets which struck them either in their legs or hands. But I did not see more than two or three persons who were shot by assault bullets. I was out until 10 pm. The demonstrations continued until 11 – 12 at night.

My friend’s son was shot by pellet, I believe, between his neck and shoulder on 17 November in Officers hauled him away in that wounded condition from the clinic. He had not even received any medical treatment. His hand got infected. His family did not know his whereabouts for a few days. My friend went to them and pleaded with them to let her do something for her boy, to stop the infection in his hand. They refused. He was in detention for about a month. His hand has not healed yet. All clinics in the city were under surveillance of the officers. Anyone who went to a clinic would be immediately arrested and taken away. I have heard that the officers arrested people who were injured at other roundabouts and took them away. There was firing on 17 November. Officers were in black uniforms and could not be identified as they had covered their faces. I saw Basij only in the afternoon, they were firing shots. I saw Basijis, just 20-year-old, carrying weapons.

Forces were stationed on  a rooftop of a schoolfiring shots in the air. Most shots were fired in the air to disperse the people. When they saw that people continued their protests, they used pellets. I took refuge in a kiosk made of Iranit (asbestos). The person standing beside me was hit by a pellet. I felt that they were shot from the school as there was nothing (else) overlooking the tower. I do not know how many people were shot there as it was dark and there was no electricity.

When people stormed the City Hall, a number of officers were shooting from above. I do not know whether it was the City Hall rooftop or not, it was not clear. Most of them had covered their faces. Most (of the bullets) were pellets but they also used assault bullets several times. In the City Hall alley, they fired from the front and behind. We threw stones at the City Hall building and set the City Hall vehicle on fire. A girl got injured there. Pellets would hit those who were running away. They shot at peoples’ hands and legs. Then, we dispersed so the officers would go. Firing continued until late at night. They said that on the night of 17 November there were a father and son The son was shot with an assault weapon and died on the spot. From 12 am onwards, the protestors gradually dispersed. The firing of shots could be heard until 1 – 2 am.

18 November, I went out of my house at 10 in the morning. I saw that Special Unit men were standing in the street. Their faces were covered and all of them carried weapons. Even the Police had weapons. The guns that the Special Unit carried are used mostly in war but the Police had Colts hanging from their waists. No officer was without a weapon. The Special Unit and Police vehicles were there for keeping arrested protestors. When we formed a group, we started to shout slogans. Mostly, there were women. I saw that a number of people had assembled and were saying, “We set the City Hall on fire; now where should we go and set on fire?” It does not seem likely that it was done by regular citizens. At 2 pm, a number of young men started throwing stones at the officers. The Special Unit began firing in the air. They fired assault bullets. We would retreat, then go forward again and shout slogans. Officers were stationed there and would not come into the crowd and they fired shots in the air. The Police did not do much firing. Several Basijis carrying batons and sticks, in plainclothes, would come after the people. However, when the people returned, they would not pursue them. Suddenly, two Basijis seized the hands and feet of a young man and threw him in a black van. They seized one woman and that woman screamed and shouted so much that we attacked the officers. The officers let go of this woman. I saw a Basiji beating a young man on his legs with a hand stick. He had knelt to pick up something from the ground or buckled under with extreme pain and they descended upon him. They seized him and threw him in the van. They arrested five to six people right in front of my eyes. When the officers saw a wounded person, they would show no particular reaction. It seemed that they had orders to do certain things and refrain from doing others. Everything came to a standstill at 9-10 pm. Only the officers were left. They were on the streets for one week.

I have heard that they identified a large number of people from the films they took, and then they arrested them. They said that the doctor in a clinic did not allow the officers to enter it and arrest people. It seems that in addition to arresting the injured persons, they also took that doctor with them. Medical staff was not permitted to offer medical services. All clinics were under the surveillance of security forces. I heard many times that every wounded person in two clinic was hauled away by officers.