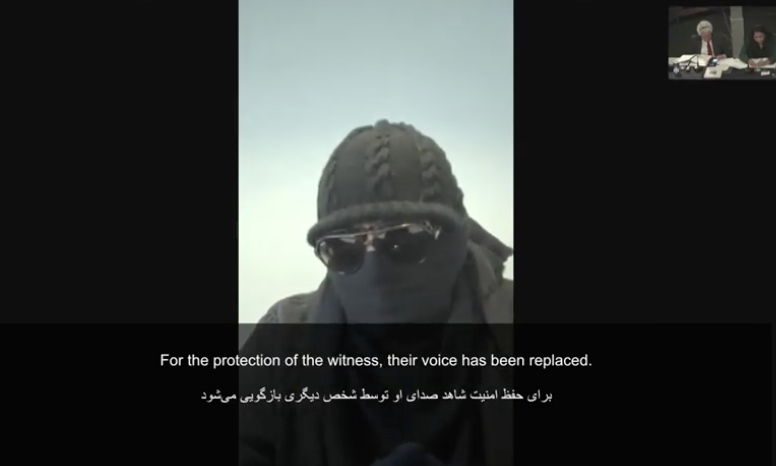 The place about which he is testifying: Provinces of Tehran and Alborz

The judges told me that the security and non-security organizations attacked people’s homes without orders from judicial authorities and arrested people in groups.  After the end of people’s protests, the city was peaceful, but the security men arrested people in groups who they thought might play a role in the protests of the next day. For instance, they would rush into my house to arrest me, but would also take my brother with them who was at home at that time.

They said that those arrests continued wilfully even after the end of protests; in those days they needed no orders of arrest from judicial authorities. Basically, orders were taken from the security council, transferred to them (security forces), and they wilfully did whatever they wanted to do without any supervision whatsoever.

Plain clothes men, who were armed and among the people, fired shots at the people from a distance of one or two meters. After arresting them, they would take them to places which were not detention centers at all.

One of my colleagues said that those arrested in the protests would be taken in groups of 100-200 to certain places, be kept there, and be beaten up there. If someone opened his mouth, he would be beaten to death. They committed assault and battery against them. Some of my colleagues said that some of the arrested persons were treated like untraceable captives, without a name or a trace. For that reason, anything could have happened to them.

One of the judges of a neighbouring city of Tehran told me, “One family comes daily to the prosecutor’s office and raises hue and cry. They have found the dead body of their son in a morgue; they make noises here every day. They are not in a normal state (of mind). I have seen them a couple of times. They were talking in the prosecutor’s office. I asked them what their problem was. I learned that their son was arrested and died in the detention center as a result of assault and battery. Then they took his corpse and threw it on the street. When the corpse was found and transferred to the Forensic Medicine Department, the physician declared that the cause of his death was “strike on the skull by a hard object.” This family claims that their son was under arrest and had not picked a fight with anyone on the street. They (the security men and judicial authorities) say that possibly this man picked up a fight with someone on the street, was killed in the fight, and his corpse was thrown on the street. After several months of coming and going, the family found those who were arrested along with their son and are now released. They brought them as witnesses to show that their son was under arrest from day one with those witnesses. And yet they were not able to prove anything. They were not able to even have their complaint registered.”

In those days, detention centers did not have the capacity to hold those (arrested) persons. The security forces usually occupy large buildings where they kept the arrested persons in groups. The prison at least meets certain conditions: it has a chart, a system, and a computer in it. If they want to arrest someone, they must have a warrant of arrest to take someone to prison. Now this warrant may be an undertaking, or collateral, or an order of provisional arrest- which is the most severe out of these. However, it must be recorded in the prison that Mr. X was brought to prison today under an order of provisional arrest or was kept in a provisional detention center. They could not do those things with those persons (as they did with those arrested at the November protests). Thus, they would come and arrest those persons in groups and create those conditions for them. They would keep them in places where, if they got killed, they could absolve themselves of any guilt or crime.