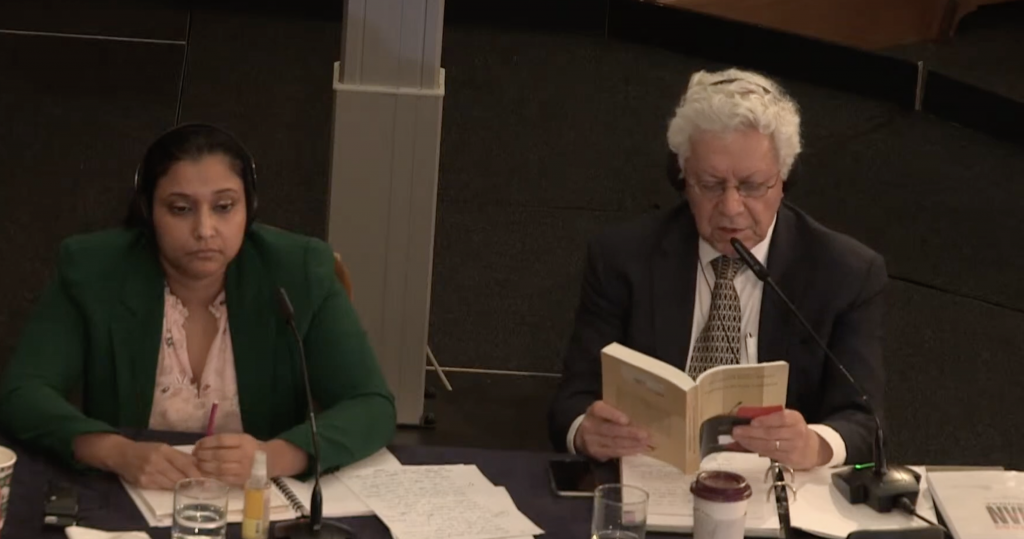 Relation to deceased: Mother of an 18-year-old youth killed in the protests

My son was in his last year of High School. He was a Haiyati (attended groups mourning the Shi’ite Imams). We are very orthodox in our Shi’ite beliefs. We never thought that they would kill our son.

My son phoned me on 25 Aban 1398 (16 November 2019) at 03:00 pm. He said that the streets there were too chaotic and that he was coming home. He was on the sidewalk. He was only a passer-by and was walking when they shot him. They shot at his head and neck. It was almost 04:00 pm when I phoned him; he did not answer. After I called him 10-15 times, a gentleman answered and said, “Your son has been wounded. They have brought him to the hospital and his head is being bandaged right now.” He was shot from a distance of about 12 meters. One of his friends was there when he was shot. There is a film of the moment he was shot. My son was standing with his friend and they were talking. Suddenly, my son fell on the ground. His friend thought that he had become sick. When he got up, his friend saw that my son’s head was bleeding (I do not have the film and have not seen it; they have not shown it to me as I get very sick). His friend said that when he was brought out of the ambulance at the hospital his eyes opened and closed. When he was brought inside the hospital, he was still alive. When I asked the driver of the ambulance, he said that he had opened and closed his eyes. His friend, who was with him, also said that he was alive.

Meanwhile, his grandfather and his friends searched for him in all hospitals but failed to find him among the wounded and the dead. I arrived in the morning and went to the hospital. I searched for him everywhere, but they said that he was not there among the wounded or the dead. I showed his photograph to all personnel of the hospital; one of them recognized the photograph and said, “It is the same young man who was shot in the neck last night.” I asked where he was now. He said, “We do not know, Madam. Go to the hospital’s security department.” I went to the security department. They threw the documents of my son disrespectfully and told me to go to Cemetery.I said, “Dead people are taken to that place. Is my son dead?” He said, “Yes, he is dead. Go and find him there.” I asked, “Where could I find him?” He replied, “I do not know. Just get out of here.”

For three days and three nights, I searched for my son everywhere imaginable but failed to find him, until I learned from an acquaintance that my son was in morgue among the persons of unknown identity. The interesting thing is that my son, at the time of his death, was carrying all his documents with him. Now, I don’t know how on earth they put his corpse among the persons of unknown identity.

In morgue , when they were calling the names of families one by one to come forward and identify their dead relative, one man shouted, “What is the wrong with you guys? You suddenly rush together. I will call names one by one; families should come forward. We have seven hundred names right now.” That is, the names of seven hundred dead persons were there at that very moment. All persons who were there with me heard this. When I was in morgue , all persons who were there were family members of those killed in Aban (November protests). There was a large hall that was full of people. I learned that they were family members of those killed in November as all of us spoke to each other.

When I found him (my son), his body was completely opened. They said that an autopsy had been performed on him. I said, “If an autopsy is supposed to be performed on the body of my son, then autopsies should have been performed on the bodies of all those killed in Aban (November).” They said, “No, autopsies had been performed only on a certain number of bodies.” I really don’t know what they have done to the body of my son. I am sure that they have stolen certain organs of his body. There is no reason to perform an autopsy on someone who has been shot in the head. They did not show me his body as I was already suffering from nervous problems. I saw him on the monitor for the initial identification. Certain family members who had seen his body said that clearly, his internal organs had been stolen. Our family members who had seen his dead body said that there was a very large hole on the back of his head.

The bullet had entered from below the neck and exited from the head. Someone who had seen my son’s dead body said that the bullet struck beside the ear, below the neck and close to the ear, and then exited from above the ear. They had written in the death certificate: ‘Work of war equipment outside of war’. They have written in the burial certificate: ‘Hit by an accelerating ballistic object, breaking up of the skull bone and crushing of the brain tissue’. But those who have seen the corpse of my son say that the bullet exited from next to his ear, that is, (the hole was) below the neck close to the ear up to his head above the ear. It was not in the middle of the head or his brain. But they have written in the burial permit ‘crushing of the brain tissue’ (as the cause of his death).

When we identified his corpse after three days, they still did not hand over his body to us. They said that they would arrange a meeting (with us) and then they would decide whether or not to hand over the corpse and how to do it. The meeting was held at morgue and lasted for three hours. At that time, one of our acquaintances whose son was also killed in the November protests said that they had demanded 18 million toman in order to hand over that boy’s corpse. But they did not ask for money from us.

They only obtained an undertaking and a signature from us. They (threateningly) said that if we made noises and opened our mouth under whatever pretext, they would dig out his body from his grave. A number of plainclothes men were present at his (memorial) ceremonies. One of my son’s aunts spoke a few words at the ceremonies. Suddenly, one officer went up to her and opened his coat in front of her and showed his Colt to shut her up. All the officers who attended his ceremonies were carrying weapons. However, they allowed us to hold his mourning ceremonies.

After his burial, the Governor came to our house. The Governor said that those who were killed were killed because they had committed arson and caused disturbances. Certain persons representing the Martyrs’ Foundation, the Intelligence Department, the Governor, and the IRGC came several times to offer their condolences. A few days after my son’s death, the authority representatives came to our house and said that our son was killed by non-organizational weapon and that the terrorists had killed him. They said that they had the orders to shoot and that they did indeed shoot, but they shot on the hand and leg. If anyone fired above the waist, it was the enemy, not them.

We filed a complaint too but no answer to any of our questions has been given so far. When the family filed the complaint and asked who had killed their boy, they maintained silence. They gave us a form in morgue. We wrote that we had a complaint. They opened the file themselves. Whenever we went to the Governorate, they would say that the file was not complete yet, that they were investigating the case. Now it has been seven or eight months since the family ceased to follow up the file and the complaint. They believe that it is futile to pursue the case; that they have sent them on a wild goose chase. They (the authorities) say that the innocence of my son has been confirmed one hundred per cent. We tell them that if they have confirmed the innocence of my son and if he has been shot by a non-organizational weapon, then why do they not tell us all the details? They say no, everything is confidential, they cannot give us anything in writing. They cannot go any further than this.

They told us that my son was one of the innocent people killed in Aban (November). They came from TV Channel 23 and Channel 2 and interviewed his grandfather and broadcast it on TV. Channel 23 made a documentary about the families of the innocent people killed in November. His grandfather told them that his grandchild was a student, he studied his books, he was a member of the Basij, he was a religious person, he did his daily chores, and did everything he was supposed to do, and things like that.

They told me that my son was one of the martyrs; they paid the diyyeh (blood-money). Although I was in need of money, I gave away all the blood-money to two or three needy persons. They told me that I could write the word “martyr” on his tombstone, but I did not do it. I do not believe in them anymore.