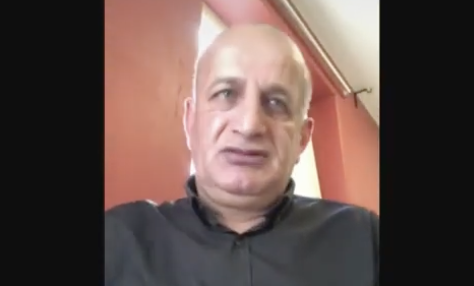 Osman was 28 years old. His father does not have hands and is paralyzed. They come from a poor family. Osman went to school only up till third grade of primary school. He used to carry loads on his back and work as a labourer to meet the family’s needs. He has a 9 year old son.

In the morning of 24 Aban (15 November) people set out to stage protests against the high price of gas. Osman contacted me on that day and said, “Uncle, I want to go to Kanidinar. I want to go to my friend who is going to marry. They have invited me, too.” Kanidinar is a village five minutes away from the city of Marivan.

I have been told by a person who lives in Marivan that, “When your nephew came, I was beside him. One person who had covered his face and was wearing a black uniform shot at Osman from the front, from a distance of about seven meters with an AK-47. He fired two shots towards Osman’s forehead. Osman fell down and we took him to the hospital. Regretfully, he did not make to the hospital and died. I could not identify that man, but he was armed and was wearing Kurdish pants and a black shirt, one of those panther-design ones worn by the IRGC soldiers. He was one of the Kurds of Marivan who are mercenaries for the regime.”

A lady acquaintance of ours who had witnessed the shooting of Osman phoned his aunt and informed the family. By the time his mother and other family members were informed, night had fallen. When they went to Allah Akbar Hospital at night, the authorities refused to hand over his corpse; they said that he was a rioter. The corpse was transferred by the IRGC from the general hospital to the IRGC hospital which is located in IRGC Square. They kept it in the morgue there.

The IRGC has a small hospital for executed persons and those killed in the mountains by the police. Their corpses are brought there and kept in its morgue.

When the family learned that Osman was not in Allah Akbar Hospital, they did a lot of running around to find him. One person told my sister that he is wounded; another told her that nothing has happened. One says that he was shot in the hand; the other says it was the leg. Then one person tells them that all those killed were taken to the selfsame IRGC hospital. They handed over his corpse two days later at midnight. They told my sister, “If we learn that noises were made at the ceremonies or objections were raised at his burial, you will be held accountable. You may bury the corpse quietly; hold a small burial and mourning ceremony but there should be no noises. You are under surveillance of the IRGC. No matter where you hold the memorial service, be sure that our plainclothes men would attend that service. They are watching you to ensure that you do not make a mistake.”

They did not come after us to offer diyyeh (blood-money) or to declare (Osman) as a martyr and things like that. Only one Kurdish mullah, a member of Marivan Clergymen’s Council and a distant relative of Osman’s father, came uninvited to offer his condolences and said, “Be careful, he is killed and is gone, do not do anything. Be careful about your other children.” My sister has another son, a small daughter, and one grandson- the son of Osman.

My sister was summoned twice by the IRGC, and she visited them. They summoned Osman’s brother once and held him for two hours at the IRGC. My sister is not afraid for herself, but she is fearful for Osman’s brother- her other son. They kept my sister for two hours and then they released her. They told her, “Be careful about who you socialize with. She could not do anything more because of her other children.

I believe Osman’s family had pursued the matter to know why Osman was killed; he was just passing by. Had he committed a murder? Had he burned a gas station? What was his crime? They have heard no reply yet. I believe they had filed their complaint through the Clergymen’s Council.

The number of people killed in Marivan is 11. Regretfully, the whereabouts of three of them are not known. However, according to news received from Marivan, these persons were killed on Saturday or Friday. (Their names are) Mehran Tak, Behrouz Maleki, Shahoo Valedi, Osman Naderi, Danial Ostovari, Idris Bivareh, Osman Ahmadi, and Aryan Rajabi.