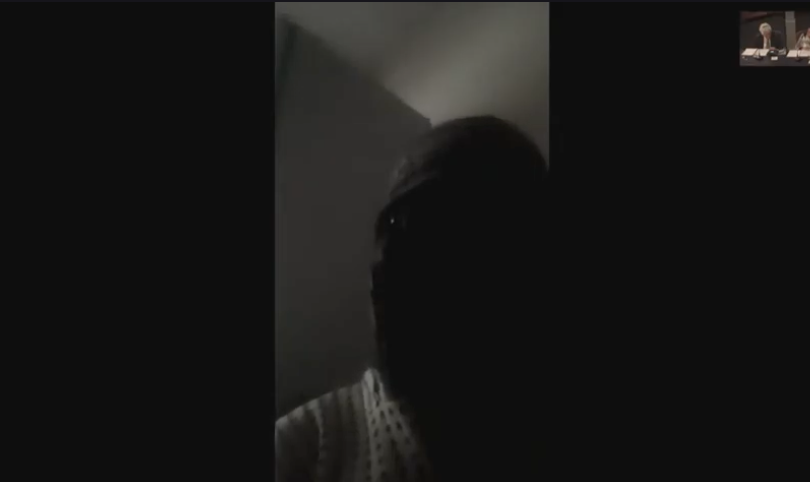 Witness’s condition: Eyewitness to shooting at people at the protest, injured, and arrested. He was brutally tortured and raped in prison.

On the evening of November 16, people in our area, gathered in the streets and were demonstrating. I dare say that there were over a thousand to two thousand people. The slogans called for a referendum and freedom of expression. They wanted cheaper fuel and all goods, death to Khamenei, death to the Basij and death to the IRGC. We lowered the windows of the banks, then the conflicts escalated, and suddenly the special units turned up. The units they used to suppress were from the Basij forces. There were forces attached to the governor, and there were plainclothesmen who were most likely IRGC. Their weapons were batons, tear gas and rubber bullet shotguns. On the first day, there were no clashes, no killings, no shooting in the air, no tear gas canisters, and no batons.

They wore black uniforms and black masks, and carried tear gas, batons, and shotguns. The Basijis wore khakies. Some were in the ordinary khakies, others in green guerrilla outfits and were not wearing masks. We knew some of them; they were people from this area. The first night, they were carrying Kalashnikovs. At first, they only fired in the air, then they attacked with batons, hitting people. My mother who was worried about me arriving home too late had come out looking for me when she too beaten with a baton. Her back and arms were bruised.

The first night, the special units guards fired mostly tear gas. There was a minibus with iron bars all around it, its windows were not visible; it just had a lot of holes around it. From inside the same minibus and from behind the same holes, they threw tear gas, they fired warning shots, and shot rubber bullets. It was as if they had built an armored minibus.

The guards fired a lot. As people passed, guards beat them, and me. I saw a woman walking down the street when she was shot in the leg. Even when there were no demonstrators in that street at all; so, it wasn’t like she would have been among a group of demonstrators and got shot.

One of my comrades was shot in the face and lost his eye. He had been shot in the eye and they had to remove his eye, now he has an artificial eye and paid all the expenses out of his own pocket.

I did not go to work on November 17th. The situation here was bad and I could not find a car to work. At about four o’clock in the evening, I went to look for a friend of mine. At about five o’clock, we were about ten people, and we started the demonstration. Suddenly, about 300-400 people were added to us. We started making a barricade with garbage bins. The guards were there, we were shouting, we were going forward, the guards were lobbing tear gas, and we were throwing their tear gas at them. Without warning, the Basijis came stormed us, and began firing off a barrage of bullets. First, they fired a few shots, then they just full-on opened fire at the people. When several people were shot, the people retreated.

We were about 5-6 thousand people who were protesting. At about seven o’clock in the evening, we saw plainclothes snipers shooting from a roof, at a man who was standing on the street corner watching, whose head exploded. So, people got angry and attacked the guards who were barricaded on the other side. Then 3-4 minibuses came and stood in front of the people in a barricade position and fired with rubber bullets and Kalashnikovs. This clash lasted for about an hour and a half.

At about 8:30 pm we attacked the guards there with the rest of the crowd, and a 30-something-year-old woman started running ahead of me. Guards shot the woman, who was close to me, in the head, spraying her brain on the ground. And it even splashed on me. It happened in a hundredth of a second, I stood and looked, I turned around and suddenly my feet locked. They also shot at my side. My brain whistled, I was not in pain, I was bleeding profusely. I could not walk. My eyes went black. People in the air grabbed my hands and feet, dragged me, and took me to an alley. While the guards were reloading their rifles, several people ran and brought the woman’s body and left her next to me. The bodies of a 14-year-old girl and a 20-year-old boy were also placed next to me.

An acquaintance who was standing over me, later said, “I thought you were going to die. This is how blood comes out of your back. I could not stand it and ran away.”

I remember people comforting me, saying that it’s nothing, you’ll get well, you won’t die, it was a bullet that passed through you. Then people shouted that the guards were coming again, they had reloaded, and were ready to shoot; someone put me on his back and started running. Suddenly I saw that the guards were coming, the one who was taking me with him, put me back down in the middle of the street and ran away. I stayed there like that until the guards began to step back.

Then someone came and put me in a car, they put me in front, someone was lying in the back. I could talk, but the fellow in the back, no matter how loudly I called out to him, he would not answer. I did not know if he was dead or alive. I was taken to the hospital in the same car. The bullet had passed through my waist, and I was bleeding. The first thing I saw when I was laid out on the bed, was a young woman who had just become a mother. The woman happened to have been on the street that day, when she was shot, she was holding her baby tightto her chest and began running. She was shot in the back of the baby had been shot in the back of the head, and the bullet had gone right through to the mother’s heart, they were both dead. I saw this while I was on the stretcher. This scene has been in my nightmares every night.

In the hospital, all the rooms were full of beds, the beds were stuck together and there was no place to walk. The whole corridor of the hospital and the emergency corridor were full of wounded people. They did not even have a normal sterile gauze to stop me from bleeding; I had to use a handkerchief to try to stop the bleeding. I had surgery that night. When I woke up, an officer came and wrote down my details. My third day in the hospital, Basij forces or troops poured into the hospital, picking up the wounded who could walk and took them away, telling those who could not walk to give their name and contact information. Intelligence had told the hospital staff to “call immediately when the injured were to be discharged; we will come and take them away.”

There was an injured man who had lost his spleen and a kidney. His lungs were damaged, and he was still unconscious. They also wanted to force him to wake up and get his information. When he was forcibly awakened, he was stammering and wobbly, and the officer kept telling him “You’re lying.” My family later explained that: “When we saw that there was no news about you, your phones were turned off, we went to look around Behesht Zahra (cemetery), the medical examiner and the Basij base, we were looking for your body everywhere and we were looking for you.” It took 3-4 days for them to figure out what condition I’m in.

My intestines and pelvis were perforated, I lost my intestine. The nerve vessel on the right side of my body is damaged, my right leg is still numb. I was handcuffed and taken from the hospital while I still could not walk. I was walking like a turtle. It took me a long time to walk a short distance.

When I was taken to prison, there was a lot of hollering and screaming, and it was clear that the detainees were being tortured. There was also a child under the age of 15 in prison who had been shot with a rubber bullet. Ten other people were injured like me. Everyone was hungry and thirsty, and everyone’s wounds and stitches were open. The place where we were taken did not look anything like a prison at all. It was like an ordinary house built of bricks. The floors were black cement. It had no carpeting, no rugs, no heating. It was winter then. They kept us there for a month and a half and tortured us. All kinds of physical, psychological, and sexual torture that I do not want to detail right now; I cannot say. They were videotaping us. They threatened to kill my mother. I have not been able to get a good night’s sleep since then.

We were asked to say who our leader is, which country we work for. When I was arrested, my abdomen was internally ruptured, my pelvis was punctured, and I was in pain. When I was walking, my blood pressure dropped and I was sweating in the middle of winter, I suddenly lost consciousness and sat in a corner. However, I was constantly hogtied, that is, I was lying on my stomach, my arms and legs were tied behind my back, and I was hung from the ceiling in that shape. I was kept in this position for several hours and then they would come and interrogate me. I was kept in this position for at least an hour every day. I had been tied up like this so much that my entire shoulder blade was bruised, and I could not move my hands for three or four months.

They would not take us to the toilet. There was a bucket in our cell, we had to go to the bathroom, eat there and sleep there. On three or four occasions, cold water was poured on me, just to make me shiver. Slapping, punching, kicking, and hitting in the head and face was normal and they took every opportunity to beati me. On four or five occasion as well, they touched me {meaning unwanted sex}. Another thing happened that I cannot explain properly. Twice, they inserted a bottle of soda inside me.

A few months later, when they saw that I had nothing to say, they released me. They cut the shot of my intestines and threw it away. I still have serious discomfort when defecating. I am very mentally distressed, I wake up most nights, I self-harm and I constantly hit myself in the head. My case is still open and I am being harassed.