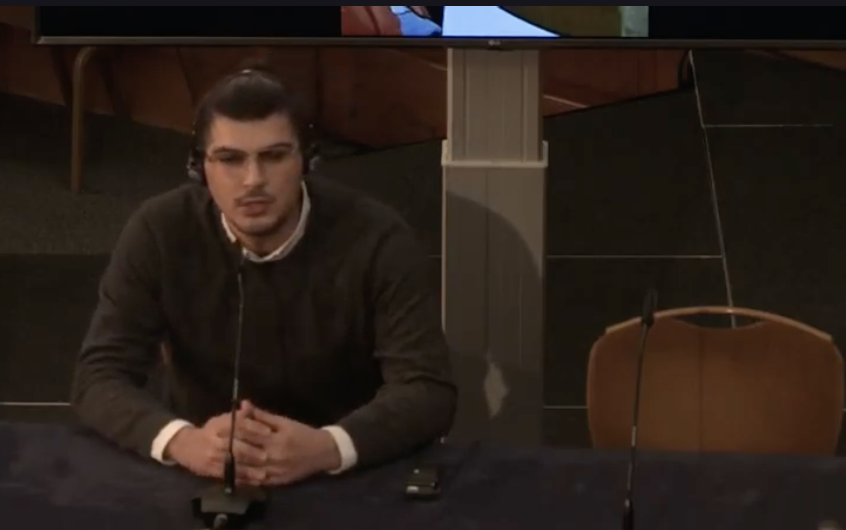 Witness status:  Witness the protests, know about a person killed

At 11 a.m. on November 16th, at the Abu Dharr intersection, people gathered in front of a gas station and lit a fire. Some people were filming these scenes along the street. There they lit a fire 100 meters by 100 meters. About a hundred people were standing. The guards were also inside the road. The people bent the guardrail, made a small fire, and chanted around the fire. The aim of the slogans was the principle of government.

I heard a barrage of gunfire near Sattari Highway. Tear gas was also fired at the people from the base of Nezam Mafi Mosque. Inside the Sattari highway, the cars were completely turned off and had stopped.

I saw the repressive forces there. Officers attacked people with motorbikes. Some of them wore khaki clothes and Keffiyehs around their necks. Some of the officers also wore black winter hats. I saw batons in their hands. There was the sound of gunfire and tear gas.

Then we reached the end of Jannatabad. That was the place where all the conflicts took place. The forces of Nezam Mafi Mosque and Maryam Park Basij base were confronting the people there. Officers fired tear gas, and people resisted. The agents who attacked the people on the Sattari highway were Basijis. The Basij forces were from the Imam Ali base, Nezam Mafi mosque, and Maryam Park base. I heard from the children that they were firing from the top of the Basij building in Maryam Park. They did not fire tear gas into the air but fired at the crowd. The troops were sitting on two motorbikes. The second person, sitting on the back of the motorbike, behind the driver and had only come to beat people up with their batons held high. Some in khaki and green military uniforms stood in front of the Nizam Mafi Mosque. From that night on, the internet slowed down and was throttled, and then it was down for ten days, and we could not hear from anyone.

Seyed Ali Hosseini was 21 years old. He was a close friend of mine. We served our conscription service together and lived together for two years. Ali was a peddler and a bachelor. He helped his family economically. His family was poor. I remember that during the conscription service, he would take leave on an hourly basis on days when he was on guard duty at the garrison; for instance, from noon until the guard duty began. He would go out to work for a few hours, return to carry out his service and go to his family in the morning. Such was the family’s economic condition. Ali had no political activity; if he had come to the protests, it was due to economic reasons.

The day this incident occurred, a friend of mine told me that Ali was shot in the afternoon around 05:00-06:00 pm and was taken by an anonymous person to the hospital. Ali was shot right in front of the Basij barracks. If you consider one guard line between the two lanes of the street, he was shot on this side of the road right in front of the base. They had shot him from inside the Basij base and the rooftop of its building. People had taken him to the hospital in a private car.

When I contacted him again after a few hours, he said that Ali had died on his way to the hospital. Ali was shot in Mishkin Dasht, Karaj, in front of the Basij base. I went there and saw the place myself. I had gone to see Ali’s family. I was curious to see where he was shot. That Basij base was shown to me by my friends.

He has three sisters younger than himself. When the security forces took possession of his corpse from the hospital, they did not permit him to hand it over to his family. They required an undertaking from the family not to hold any ceremonies, not to open their mouth, and also to pay money. They fired two shots at Ali; they wanted Ali’s family to pay the bullet money to take possession of his corpse. The family’s financial condition is not good at all. I have heard that the family had to pay for the bullets he had been shot with, and after that, they were permitted to take possession of his corpse. Ali’s family is poor and unable to pursue his case. It is for this reason that I am here at your service today. I am sure the family themselves were not in a position to seek justice for him; otherwise, they would have given the testimony instead of me.

Ali’s family is poor and does not have many supporters in seeking justice. They did not say anything to me. His mother said that Ali told her he would come back at night; he left and never returned. Some friends and I were shaken to the core and did not know what to say to Ali’s mother. His mother told us, “They did not tell me anything about how he was killed or whatever had happened to him. But later a film was broadcast. That day, I recognised the Basij base. I recognised from the shape of the Basij base building that the film was related to Mishkin Dasht. In that film, a protester was holding the shells of assault bullets and saying they were firing shots at the people.”

The same friend who told me about Ali’s death said that Ali was standing in front of the Basij base when he was shot. Ali was buried in Behesht Sakineh (cemetery), and as far as I know, they were not allowed to hold mourning ceremonies. They held the ceremonies on a tiny scale, attended by only immediate family, but they could not put up a banner.

In the first year of his passing, the gathering at his resting place was also small. This year was the second, and they served a small meal to a few loved ones.