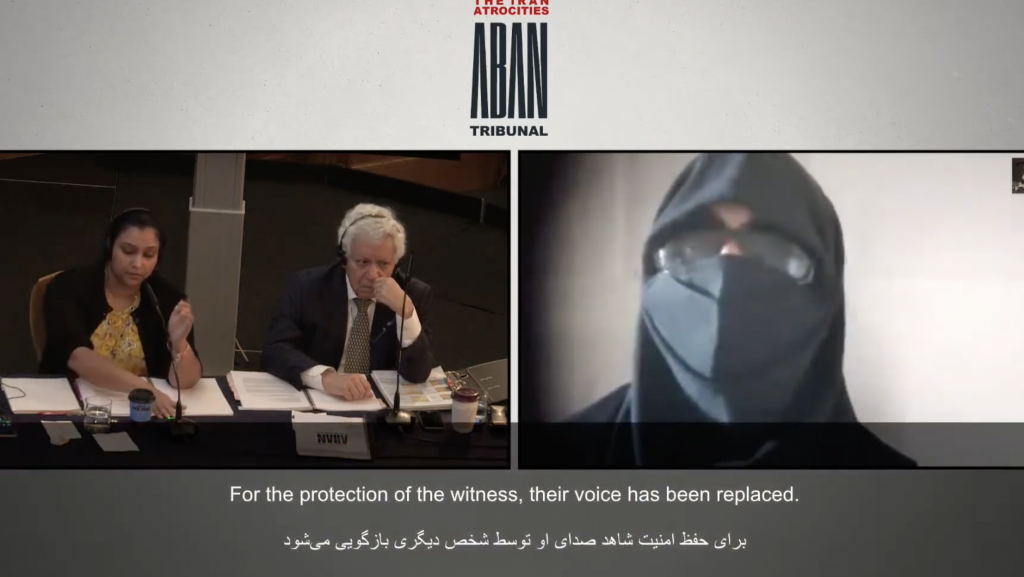 My son was a very calm person. He was always against all this injustice, oppression and corruption existing in this country. For that reason, he attended the peaceful protests of Aban 1398 (November 2019). He himself told me at night, ‘When they were setting banks on fire, the security forces were separate from the people. They (the security men) came to banks, held something that looked like a lighter under the locks of banks, but it was bigger and had much more heat than the lighter. It was something peculiar; when they held its flame under the locks, the locks would melt away quickly. They would open the door and attack the banks and the people would follow them.’

He was in the demonstrations with the people, side by side with them. Our house is located in a crowded place of the city. I myself saw from the top of my house policemen getting out of vehicles with no logos. All of them carried weapons. Each one went to one direction. They would say loudly to each other: Shoot anyone you see; have no mercy on anyone. I saw men, snipers, on the rooftop of a residential building located right in front of our house. They were on the rooftop, high rooftop in front of our house. Those snipers were in plainclothes.

My son did not come home on the night of Monday 27 Aban (18 November). I became anxious but couldn’t do anything. In the morning I went to police station, Special Unit, you name it. I did so because I thought that it was possible that they may have arrested him.  No one replied to you; they only tried to get you out of there. They treated you really bad. There was a man there; his son was arrested. He said, ‘Madam, all the arrested persons have been sent to the Command Center.’ I went there and saw that all fathers and mothers were standing behind the doors of the Center. They answered to no one. When they saw that the number of people had swelled, they said: ‘Go home. If your child is innocent, he would come home by the afternoon. If he or she had done something wrong, they would be sent directly from here to the prison.’ We remained there for a couple of hours but no one seemed to give it a damn. I came home. I was anxious and sick until my son came in the afternoon. He was arrested and then they had released him.

He was arrested on 18 November when the demonstrations had come to an end and people were returning to their homes. Later, when I asked questions, his friends and shopkeepers of the neighbourhood told me that my son had filmed the demonstrations one by one. He showed it to me at night and sent it to Iran International TV. At the time they had arrested him, he quickly threw his cell phone in a corner. He was at the Command Center. They would seize the cell phones from the boys who were there. They would ask them to fill in a form of undertaking. After that they would ask them to turn the cell phone on and would check it thoroughly. If there was a clip of the protests in the cell phone, they would send him straight away to the prison. However, since my son had thrown away his cell phone and did not have it in his possession, he was asked to fill in the form. They obtained an undertaking from him and released him in the afternoon. However, I don’t know what they did to him that he was in such a bad mental condition.

He was very sick after his release due to emotional and mental stress he suffered. He wouldn’t answer any questions I asked him. He lived in a state of extreme mental shock. The only thing he told me was, ‘Mom, last night they set a number of boys on fire while they were alive.’  When I saw that he was very sick, I took him the next day to a psychiatrist. But he said nothing either to me or to the doctor. The doctor said, ‘Madam, he is in a really bad condition. No matter what I asked him, he gave me no reply.’

He had suffered an extreme mental shock. I don’t know what they had done to this boy that he had become like that. The doctor gave some medications and said, ‘Ask him to take it, but monitor him. If you see that he does not get better in the next few days, come back to me; I’ll refer him to a mental hospital to be admitted there so he would not commit suicide.’

He was in such a state of mind that whatever questions you asked him, he would not understand it. Whatever I asked him, he would just look at me in a state of bewilderment. Marks of baton were on his body; there were several marks of baton on his forehead. A finger in his left hand had swelling and had become black and blue. The mark of baton was on his finger, on his nail; it was on his hand too. His back had several marks of baton. His back was black and blue. He had withdrawn himself in his shell.

When he came home, he said, ‘Mom, I’ll not stay here anymore. I must go to a secluded place where no one could reach me.’ He said that the security agents watch all the films that have been sent to them, and then they would come after him. He was anxious that they may notice that he was in the protests. He only wanted to go away from home. I saw that he was very restless. I have an empty house not too far away. I took him there. His brother was also there.

There was so much stress on my son. He hanged himself by the throat. He only wrote for me: ‘Mom, I cannot put up with all this stress anymore,” and hung himself by the throat. After sometime when I somewhat recovered, I filed a complaint. It became too long-drawn. I kept coming and going. I knew that it will be of no avail; but I kept coming and going for my own sake. Ultimately, they declared the file closed. I protested as to why the case was not heard. A long time passed. Again, nothing happened. I started pursuing it seriously. Every once in a while, I would go to the court and come back. At the last meeting they threatened me and told me never to set my foot in the court.  I was threatened by the security department. They said: ‘Do not pursue this case for the sake of security of your other  children.’ I could no longer go. I mean, I could go but it was to no avail.

For the mourning ceremonies they said that there should be no hue and cry. A number of people came to my house for the mourning ceremonies of my son. A woman clad in black chador came and sat beside me and said, ‘There will be no hue and cry and you will not open your mouth. Don’t forget that.’  There were two persons (security agents); one of them sat on the other side of the hall and one sat by my side. There were limitations for his burial too. They said that everyone could not come there; the number of persons should be limited. For that reason, there were only family members and relatives of first degree. I believe it was the Intelligence (which imposed such limitation). They said that the notification was important too. Everything and anything should not be written in it. It should be a simple notification. They said about the tombstone that it should be very simple; it should not be suspicious. We wrote a simple text.

They phoned us several times and told us to be careful not to take any action. I post stories about my son in Instagram. They warned me not to include everything in my storiesI don’t know from where they contacted me. I faced difficulties every step of the way. For that reason, I somewhat relented.