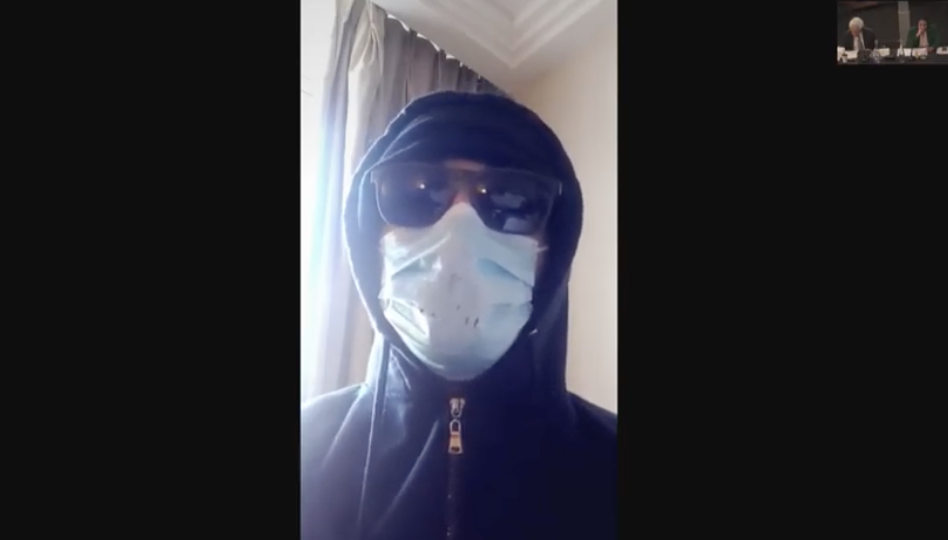 Witness’s condition: Witness to protests and shootings of protesters, Witness of the arrest of Kaveh Visani, who disappeared during the demonstrations and whose body was later found

I saw that people had turned off their vehicles’ engines in protest on Ferdowsi Bridge on 16 November. The policemen and anti-riot men had descended upon that place and were attacking people’s vehicles, their glass and mirrors, and would beat up anyone with a baton. Even if a driver got out of his car and asked them not to beat him up because there was traffic and he could not move, they would beat him up anyway.

I saw people shouting slogans and walking toward Eqbal Square, the corner of Pasdaran Avenue or the Sixth of Bahman Avenue. Initially, people were shouting slogans, and the policemen would tell them to go home till the anti-riot force arrived. It was then that the shooting began, and all the people ran away towards Sadaf Complex and the neighbouring by-lanes. The anti-riot men fired at the people with shotguns and pellet weapons; I also heard Kalashnikovs being fired. Blood could be seen on the street, blood spots on the pavement and parts of 6th Bahman Street.

It was on 17 November at 4:00 PM when I arrived at Naboovat Square. About 500 people had assembled there; then, the crowd grew. There were no skirmishes until the anti-riot force on motorbikes entered the city from the same road. To prevent the arrival of those officers, people dismantled a telephone booth and set tyres on fire to stop the arrival of police vehicles and motorbikes. The anti-riot men started firing at people.

At that point, I saw Kaveh Veysani being arrested in front of Naboovat Square; he is one of our fellow townsmen, and I am somewhat acquainted with him. I saw three anti-riot men beating up Kaveh with batons, Tasers, pepper spray, or whatever was in their hands. They seized Kaveh at 12th Farvardin Avenue, towards Naboovat Square. Several plainclothesmen and policemen attacked him and beat him up. Then, they threw him in a police van and took him away; they also threw several others in the same van. I saw two officers in front of a police station in green uniforms, like police uniforms. They smashed a bank’s automatic teller machine with a baton; one of them was wearing a helmet while the one using the baton had no helmet.

Based on reliable information I received (how this information was obtained is being withheld by the Counsel), I know that Kaveh’s father pursued Kaveh’s trail from the very same day; he went everywhere from prison to the police station to the prosecutor’s office. They denied any knowledge of Kaveh until about 19 days later, on 6 December, when they informed his father that Kaveh’s corpse has been found. They had thrown Kaveh’s body in the village of Saranjianeh, near Sanandaj, close to an electric pylon. They (the family) found Kaveh’s corpse after an unknown person phoned them at home and said that if they wanted to see their son, they should come to Towhid Hospital. An ambulance had already brought the corpse from Saranjianeh to the hospital.

The Medical Examiner announced that his cause of death was electrocution. They blamed him (Kaveh) and said he intended to steal the electricity transformer; but the blue and black bruises from the baton-beating could be seen on his body, there were marks of assault and battery. His hand was broken and the effects of torture on his body were visible. They had told the family to blame the Kurdish (political) parties for Kaveh’s death. They visited the family with a camera and wanted them to say, on camera, that the Kurdish political parties had done it, but the family refused. They threatened the family that they would only hand over the corpse on condition that they keep silent and make no noises at Kaveh’s memorial service.

Kaveh was 30 years old; he had a two-year-old daughter and his wife was pregnant. Their son was born after Kaveh’s murder. He was a regular citizen, he was not looking for trouble. He had come out on the street at that time to pick up a fare, but the officers broke the glass of his vehicle, the only tool he had for work. The only source of his income was that white Peykan (car) with which he picked up the fare. Kaveh’s family never complained to any media about his killing. They are a poor and humble family and do not look for trouble.