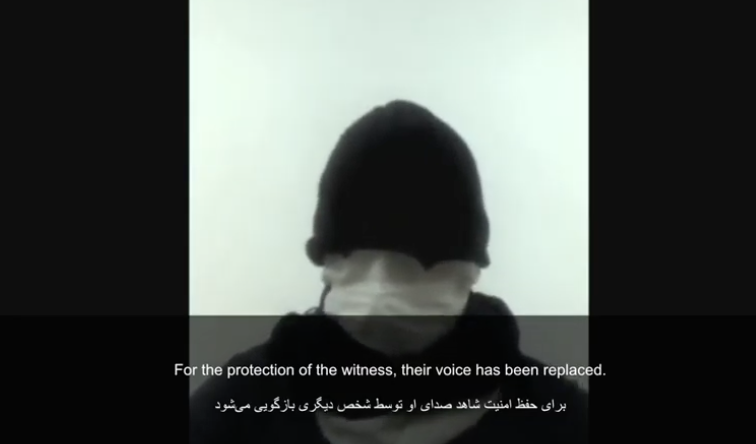 I work for the police. I never saw myself in police uniform facing my own people in those circumstances. For this, I will never forgive myself.

Protests had started at 11 in the morning on Saturday 25 Aban (16 November) and they started sending forces to help the police of the city where I was stationed. Official alert had started. I heard continuous firing and bursts of fire for about 45 minutes from my workplace on Saturday starting about 12 noon. I was at the capital city of the province the day before. They had given (police) coverage only to places of fuel (gas stations); the protests had not warranted the call of personnel and issue of alert.

When I went to my workplace, they issued an order of alert. We have a security council. The organs constituting the Security Council consist of the Governor or Governor-General, the Army, the Police of the Islamic Republic of Iran (NAJA), the IRGC, the Intelligence Department, and the Radio and Television. One of the powers of the Security Council is to limit and disrupt the speed of the Internet before the occurrence of any event. I have seen it myself what approvals they have before the occurrence of any event.

The personnel had to stay at the  police station on Saturday. It was after lunch time that they sent the personnel to second combat organization which is in fact the secondary duty of each man, other than his principal duty. For instance, one person is in charge of filing at the NAJA and his rank is sergeant. His principal duty is commensurate with his rank. If a client comes in from outside, he knows that he is in charge of filing. But he alone knows the second combat organization. It is a part of very confidential matters. For instance, it is possible that his secondary duty at night is to fire RPG and this principal, military, and security duty is mostly used in situations of alert and suppression.

I did not want to face the people for personal reasons. I convinced them that I would not participate in that alert. However, I was a sniper, generally speaking, in the second combat organization. They asked me to perform my secondary duty as a sniper in November 2019.

Of course, I never performed my secondary in the street protests. Luckily, the protests were not so intense.

I heard the order of alert from our direct commander on Saturday, 16 November, after office hours, around 02:00 pm. He had received his orders from his superior. They told the personnel to be on alert for the second combat organization.

Our weapons were Kalashnikovs. Kinase and Simonov were also issued to some of us. But most of them were given shields and batons. as far as I know, the personnel were given weapons but they played no part in the shooting. None of us fired a shot on the people. Normally, firing for the police is not that easy. As long as they have no such order, they cannot shoot. The consequences for the personnel are serious. On the first day, our forces were ordered to go, but they had no order to shoot.

It is possible that the IRGC or Intelligence personnel had access to those weapons as there is certain correspondence in this respect suggesting that the shots should not be fired from the formal weapon of Kalashnikov so that an authority like the Aban Tribunal or another organization may not be able to easily condemn them later on.

I have seen only films taken of the street on 25 Aban (16 October). I have seen in those films that the bank buildings had been set on fire and lots of blockades (new jersey) had been put on the streets preventing any traffic on the streets. I only heard shooting in those films. On that day I heard a horrible sound of shooting at two different times which I had never before heard in my life. I heard it from a distance; we were at a distance of perhaps one or one and half kilometres from the place of skirmishes. That sound was not similar to that of a Kalashnikov; it was from a weapon that had a range of at least over a kilometre.

On 17, 18, and 19 November and continuing up to Thursday of the same week they forced us to protect the NAJA (police) buildings. Our police station had received a letter from a commander of operations of our city asking it to make its personnel available to them because the police alone was not able to control and suppress the protests due to their immensity. The Special Unit forces were not brought to our city up to that time.

They gave us both Kalashnikovs and batons. They said that if we were required to use weapons, they would inform us. The demonstrations did not last up to Thursday in that area, and we were not ordered to shoot.

The police personnel were not involved in skirmishes with the people in those days, except the use of batons. That is, none of the NAJA men had fired shots at people. The entire shooting by NAJA was in the air, just to create fear and intimidation among the people to stop them from creating a lot of chaos, to persuade them to stop the protests and to go home. Shooting that resulted in injury and death was all done by the IRGC plainclothes men or the Intelligence Department men.

As to the statistics of arrested persons, I cannot give precise statistics. I can only say that about 50 persons, ranging from 15 year old to 45 year old, all men, handcuffed and blindfolded, were handed over to our station . They really had no space left in the prisons of the IRGC or the Intelligence Department. Within a week to 10 days, we handed back all the prisoners kept at the station.