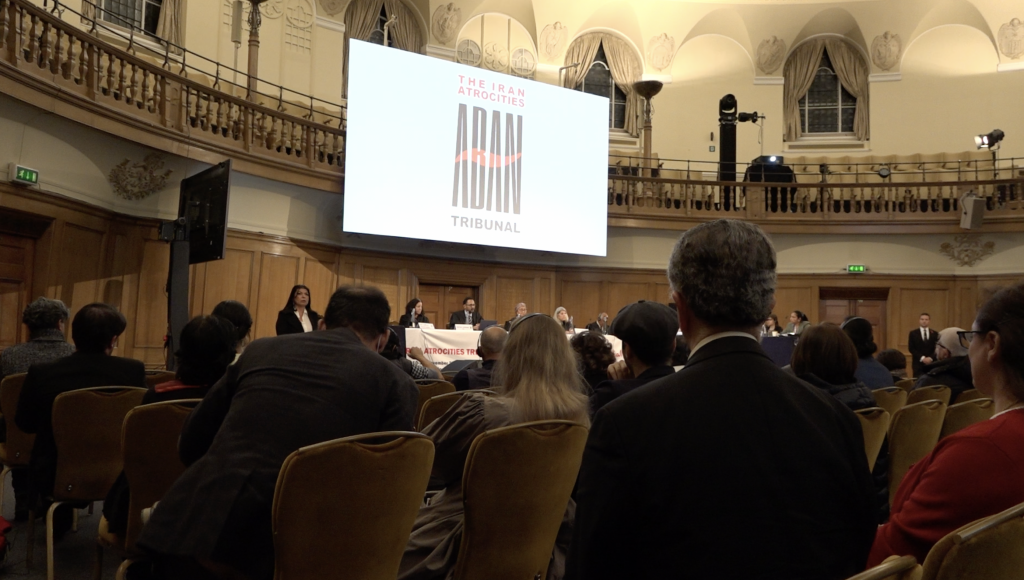 A formal letter sent to the Iranian embassy from International People’s Tribunal Counsel implores investigation into the crimes committed during the November 2019 protests after officials call to end the proceedings.

This letter, undersigned by Hamid Sabi and Regina Paulose, co-Counsels to the Iran Atrocities Tribunal asks of the Iranian embassy to take action and hold the 160 officials accused of crimes against humanity during the November 2019 protests responsible. It is noted that none of these individuals have responded to the Counsel’s formal requests to provide any evidence in defence.

The Iran Atrocities Tribunal, also known as the Aban Tribunal for the month these crimes took place, is an International People’s Tribunal set to investigate the crimes committed by the Iranian regime and its security forces in November 2019.

“We encourage the Iranian government to take drastic measures to instil all the confidence of the Iranian people in its judiciary and government officials. That can only be achieved by transparent and genuine investigation of the crimes disclosed to the Aban Tribunal and by bringing all the perpetrators to justice, without exception,” co-Counsels stated in the letter.

The Counsel has accused 160 Iranian officials of crimes against humanity, including but not limited to, torture, murder, and rape, as a result of the repression of peaceful protestors in November 2019.

The letter continues to make an example of the Iranian government’s reactions to the proceedings, including their call to the UK government to end the hearings at the behest of democratic relations.

Most significantly, after the last session of the Iran Atrocities Tribunal, the spokesperson for Iran’s Ministry of Foreign Affairs made a statement regarding the tribunal, where he accused the British government of acting against the Iranian people. The co-Counsels  also stressed that formal protestations have been submitted to the UK government.

A private document leaked by a group of hackers showed an exchange between the Deputy to Tehran’s Public Prosecutor where the former detailed the actions that should be taken against Aban Tribunal, such as enforcing further impunity and refraining from making any reactionary statements. He also suggested that western powers, such as the US, have staged the Tribunal.

“By now, your government must have realised the futility of these theatricals. Aban Tribunal, empowered by evidence of victims of horrific crimes committed by the accused, is a reality and cannot be stopped by the shenanigans of your government or for that purpose any government,” the co-Counsels continued in the letter regarding the actions taken by the Islamic Republic in response to Aban Tribunal.

The Iran Atrocities Tribunal concluded its 2nd set of hearings on 6th of February 2022. These hearings included testimonies of a former Commander of the Revolutionary Guard, as well as other security forces members and former judicial officials.

The first public call for witnesses to come forward was made in November 2020; so far, over 300 witnesses have given their statements and a fraction of them have testified before the panel. The witnesses consist of families of killed victims, those who were injured or detained, bystanders, medical and government officials (former and current).

The November 2019 protests broke out in reaction to a rise in fuel prices. During the week that followed, hundreds, if not thousands, were killed, thousands more injured and an insurmountable number were detained and tortured. Though the protests were peaceful, security forces acted out in violence, using assault weapons and other lethal and non-lethal methods of repression.