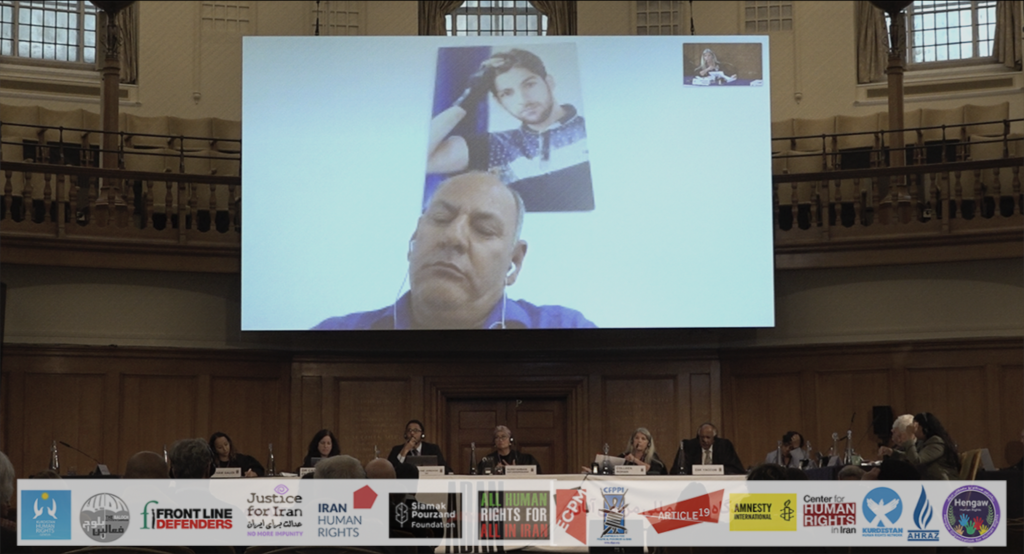 London, 07 April 2022: 15 human rights organisations, including Amnesty International, Frontline Defenders, Article 19, Together against the Death Penalty (EPCM) and 11 national NGOs, have issued a statement requesting international bodies such as the UN to take necessary action to stop the Iranian government’s harassment and persecution of the Iran Atrocities (Aban) Tribunal witnesses and their families.

Since November 2021, following the first hearings of Iran Atrocities (Aban) Tribunal which heard witnesses against Iranian government’s actions in November 2019, at least six witnesses and their families have been subjected to arbitrary arrest and detention, violence, unjust prosecution, summoning for coercive interrogations, death threats, and other forms of harassment. Some families have also agreed to give false video statements under duress by security forces for fear of their families’ safety. The NGOs asserted that, “these violations constitute a form of torture, or other cruel, inhuman or degrading treatment.”

This has intensified since the second hearing which concluded in February 2020.

The statement protests the ongoing inhumane treatment of the relatives of those who testified, many of whom have lost family members in the November 2019 protests which saw fatal violence in the hands of the authorities.

The victims include Amin Ansarifar, whose son was killed in the protests, and who has been dealing with arbitrary arrest and detention since. His family has also been threatened, detained, and persecuted. This has magnified since his testimony in November 2021.

“The authorities have ordered relatives in Iran to cut ties with Tribunal witnesses based abroad and publicly denounce their testimonies or ‘face consequences’ including detention and other harm to them and their family members, including children,” the NGO statement says.

The human rights organisations call on the UN Human Rights Council to establish an investigative mechanism to collect, analyse, and preserve evidence of crimes, according to international law, committed in Iran to help facilitate fair criminal proceedings in the future.

“To date, no public official has been investigated, let alone held accountable for ordering, committing, or acquiescing to the grave human rights violations and crimes under international law committed during and in the aftermath of the protests,” the statement concludes.

The Iran Atrocities (Aban) Tribunal was established in 2020. Six internationally renowned lawyers were mandated to assess whether the Iranian authorities’ actions in November 2019 amounted to crimes against humanity. So far, over 300 witnesses have given their evidence and a fraction of them have testified before the panel. The witnesses consist of families of killed victims, those who were injured or detained, bystanders, and (former and current) medical and government officials.