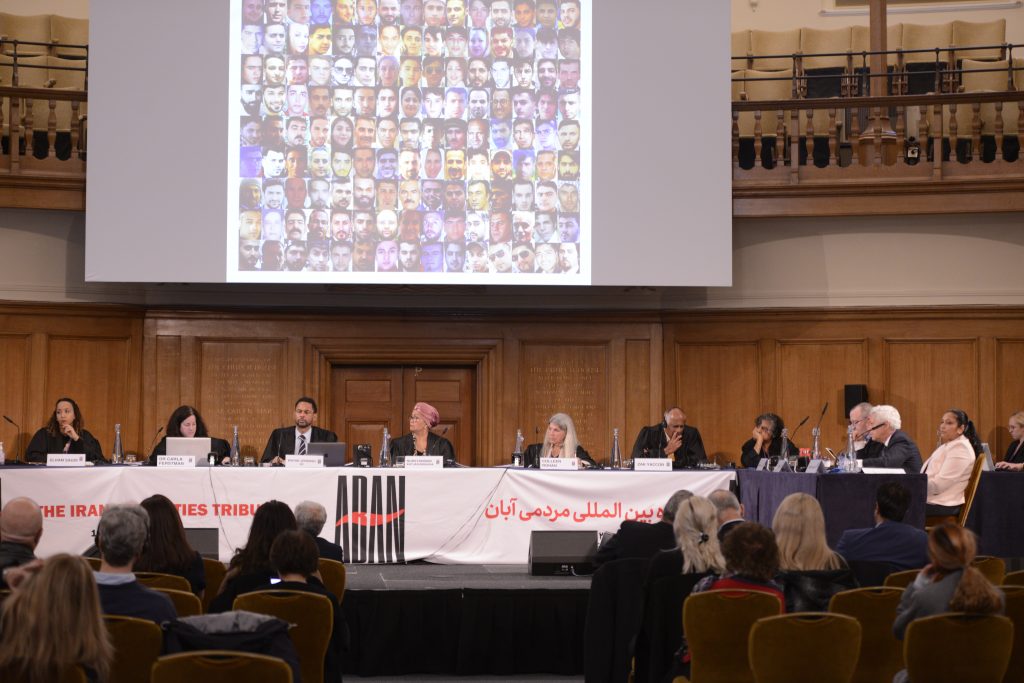 The Iran Atrocities (Aban) Tribunal concluded two years after its establishment in a final verbal delivery of the judgement on September 30th, finding the leaders of the Islamic Republic guilty of crimes against humanity.

At the height of the current protests in Iran, the panel of judges, who had closely examined the evidence provided by the prosecution, ruled that the Islamic Republic government and its affiliated security forces had designed and implemented a plan to commit crimes against humanity, beyond reasonable doubt.

The evidence was tried against accusations of crimes against humanity, encompassing murder, torture, sexual assault, false imprisonment and enforced disappearance of protestors and bystanders during the nationwide November 2019 protests.

The panel also found that these crimes were not only planned, but their commission was concealed, through the nationwide shutdown of the internet and silencing of victims and their families.

The judgement concluded with a set of recommendations, including establishing an independent investigation, ceasing all forms of intimidation, harassment and reprisal against those involved, and to remove all laws and practices which infringe human rights.

The panel, led by Wayne Jordash KC, found 13 individuals guilty of planning and implementing crimes against humanity during the November 2019 protests, feeling that their contribution was significant and/or essential, coupled with criminal intent.

Among these 13 are Ali Khamenei, Ebrahim Raisi and Hassan Rouhani, who held and still hold the highest offices of Supreme Leader and President of the Islamic Republic of Iran, as well as the IRGC and police commanders.

The remaining 10 are still engaged with government at a high capacity and are leading the repression of the 2022 protests today.

The panel gave recommendations to the international community, including referring this situation to the International Criminal Court, holding their obligations of accountability, and urging , the European Union, the United States and the United Kingdom to establish sanctions in coordination with other accountability mechanisms.

The Iran’s Atrocities Tribunal is an independent People’s Tribunal that was established to investigate allegations of crimes against humanity by the Islamic Republic of Iran against civilians during peaceful demonstrations in November 2019. Thousands were killed and injured – many are still languishing in prison.

Among the over 250 witnesses are bereaved families, Iranian citizens with pellets still lodged in their bodies, and the officers that put them there. The Iranian authorities have refused to initiate a judicial or criminal enquiry into how the protests were handled, on the orders of the Supreme Leader.