Amnesty International has released details of the deaths of 304 men, women and children killed by Iran’s security forces during last November’s ruthless crackdown, six months after the protests.

The organization found that more than 220 of the recorded deaths took place over just two days on 16 and 17 November. New and extensive research has again concluded that the security forces’ use of lethal force against the vast majority of those killed was unlawful.

n almost all protests that took place between 15 and 19 November, there is no evidence that people were in possession of firearms or that they posed an imminent threat to life that would have warranted the use of lethal force, according to research, including video analysis, conducted by Amnesty International. The organization is aware of two exceptions in one city on 18 November where gunfire was exchanged between protesters and security forces.

“The fact that so many people were shot while posing no threat whatsoever shows the sheer ruthlessness of the security forces’ unlawful killing spree,” said Philip Luther, Amnesty International’s Research and Advocacy Director for the Middle East and North Africa.

“Six months later, the devastated families of victims continue their struggle for truth and justice while facing intense harassment and intimidation from the authorities.

“The prevailing impunity afforded to the security forces allows the recurrence of lethal force to crush dissent. In the absence of any meaningful prospect for accountability at the national level, we reiterate our call to members of the UN Human Rights Council to mandate an inquiry into the killings, and identify pathways for truth, justice and reparations.”

Over the past six months, Amnesty International gathered evidence from videos and photographs, as well as death and burial certificates, accounts from eyewitnesses and victims’ relatives, friends and acquaintances on the ground, and information collected by human rights activists and journalists.

Iranian security forces killed the victims in 37 cities in eight provinces across the country, reflecting the widespread nature of the crackdown. The poverty-stricken suburbs around Tehran saw the most killings, with at least 163 deaths recorded. The minority-populated provinces of Khuzestan and Kermanshah, with 57 and 30 deaths respectively, were also badly affected.

For each of the 304 deaths, Amnesty International has been able to gather credible information indicating the place, circumstances of the deaths recorded, and their exact or approximate date. The victims recorded include 10 women, 236 men and at least 23 children; the sex of the remaining 35 victims remains unknown to Amnesty International. In 239 cases, the victim’s name was identified.

Amnesty International believes the real number of deaths is higher. The organization is aware of scores of additional cases reported by activists, but assessed that it does not yet have sufficient reliable details to record these possible deaths in its figures.

According to information gathered by Amnesty International, in all but four cases the victims were shot dead by Iranian security forces – including members of the Revolutionary Guards, paramilitary Basij forces and the police – firing live ammunition, often at the head or torso, indicating that they were shooting to kill.

Of the remaining four victims, two reportedly suffered fatal head injuries after being beaten by members of the security forces. Another two were recorded as having suffocated from tear gas.

Six months after the killings, Iranian authorities have still not issued an official death toll. They have claimed this is due to the time-consuming process of categorizing the victims based on their level of involvement in the protests. Based on this, the authorities will determine whether the victims are designated as “martyrs”, and their families are granted financial compensation and other benefits.

The Iranian authorities have made a series of false statements or produced propaganda videos on state TV saying most victims were killed by armed “rioters” or “suspicious agents” working for “enemies” of the Islamic Republic of Iran.

Amnesty International has documented only two protests that involved gunfire exchanged between armed protesters and security forces. These were in two separate neighbourhoods in Mahshahr, Khuzestan province, and resulted in the death of one Revolutionary Guard official and one police officer.

Even during these incidents, based on the testimonies of surviving protesters and video footage analysed by Amnesty International, the security forces did not confine their use of lethal force to those posing an imminent threat to life as they also shot at unarmed protesters, killing several people.

“The state’s refusal to reveal the truth about the death toll, conduct criminal investigations, and hold those responsible for ordering and carrying out these killings to account only adds to the heartache,” said Philip Luther.

In 127 cases, Amnesty International spoke directly to sources impacted by the deaths, including relatives, neighbours, friends and eyewitnesses. In 127 other cases, it documented the deaths based on information received from human rights activists and journalists based inside or outside Iran. In 34 cases, Amnesty International interviewed medical staff working in facilities where the dead were brought. Amnesty International identified the remaining 16 cases through searching for and locating videos that were broadcast by the Islamic Republic of Iran Broadcasting corporation and included interviews with the families of those killed.

In all cases, Amnesty International took strict measures to prevent duplication of details. This involved crosschecking the cases of reported deaths according to time, location and other unique identifiers, updating its entries based on new verified information, and removing any that could potentially refer to the same person.

Protests erupted in Iran on 15 November 2019 following a sudden government announcement about a fuel price hike. During and following the protests between 15 and 19 November, Iranian authorities arbitrarily detained thousands of protesters and subjected many to enforced disappearance, torture and other ill-treatment, and unfair trials. 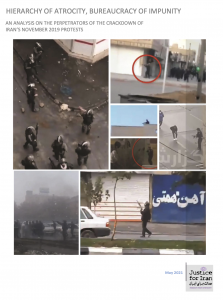 HIERARCHY OF ATROCITY, BUREAUCRACY OF IMPUNITY 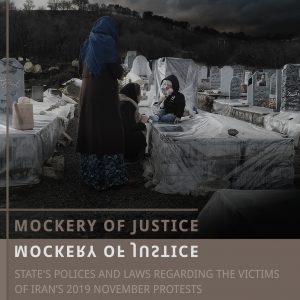 Mockery of Justice for Victims of Iran’s November Protests