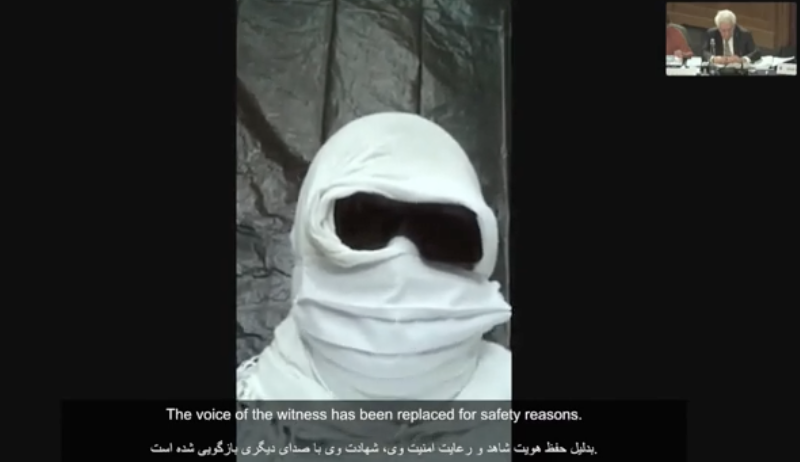 I am a Major. Our job is to make certain coordination for the occasion when violent criminals are brought out on the streets to suppress the people’s protests. These prisoners are convicted for crimes related to narcotics, armed robbery, or have sentences for 10-15 years or perhaps life sentence. They are handled in prison on this understanding: you commit certain crimes for us on the streets, and we’ll release you from the prison.

The Ministry of Intelligence and  IRGC have trained (the violent criminals) as to how to guide the people on the streets already marked by it and where the snipers and the Special Unit groups have been stationed openly or secretly. Weapons are given in the hands of even these (criminals) so they could intimidate the people. These (criminals) are scattered all over Iran.

15 November, Our leaves of absence were cancelled 24 hours before the occurrence of these events and we were told to get back to our stations. The use of weapons and firing at people had started from the very first hours in the area where I was stationed. Initially the policemen of the area’s stations and the Basij and the Sepah forces were deployed, and then the Special Unit and the plainclothes men were added to them. Police station officers were armed; the Special Unit men carried shields, batons, tear gas and pepper spray. But the forces such as Basij and plainclothes men were all armed without any exception. A number of snipers were also stationed on the rooftops of people’s houses, corners of main roads, government buildings and commercial buildings.

The violent criminals had mingled in the crowd from about 7-8 p.m. on Friday. They carried out assault and battery against the people, set banks on fire, tore the flags of Iran and attacked government buildings. There were at least 20 such criminals in every area. Every group of 7 to 10 prisoners had a leader who was monitored by electronic fetter or handcuff. Then the officers of higher rank who were in contact with them directed them whether they had the right to use firearms or cold weapons or their job was only to direct the people.

Two-level bullets were issued to us on Friday night. The two-level bullets carry a small quantity of TNT explosive instead of lead in its cartridge.  When it hits at a certain place, it explodes. It is a part of prohibited weapons even in times of normal wars. These bullets are used for one hundred per cent killing. (These were fired at people) mostly by the Sepah and the plainclothes men; they also used war weapons such as Kalashnikov, J3, MP5, Colt and pellet guns.

I saw on Saturday that the commanders issued one clip of two-level cartridges to each sniper stationed on the rooftop of a commercial building.

There were persons who I know and who were armed with non-organizational weapons no longer used by police for killing and intimidation. The Intelligence Department or IRGC made those weapons available to violent criminals and plainclothes men – weapons such as hunting guns and 45 Calibre revolvers – weapons from the times of the Shah which are no longer used by the police, and shotguns, knives and all sorts of firearms and cold weapons. The organizational weapons used by the police are MP5, Colt 45, 43 or 9 calibres. The reason they used non-organizational weapons is that it could not be attributed to military and security forces and it could be said, for example, that the Mujahedin or such and such political groups have killed the people.

When the protests came to an end,  many leaders of violent prisoners were killed in forged accidents. In fact, they were killed by the selfsame security forces that brought them on to the streets since the fewer the witnesses the better. They stage-managed those killings as if they (the violent criminals) died in an accident, or someone killed them in a fight, or they died of overdose of narcotics.

Most of the people who were killed in the November protests by non-organizational weapons or by the two-level bullets were buried the same night so that the families and friends could not know that they were killed by two-level bullets, and the families may not hold burial ceremonies. The two-level bullets are prohibited all over the world and the Forensic Medicine Department could have clearly stated the cause of death of the decedents. They obtained written undertakings from families, and the Sepah Intelligence Department and Police put pressure on the families to create no problems at the burial ceremonies; they were required to bury their dead at night if they wanted to bury them at the place of their choice.

I saw myself that the Sepah Intelligence and the police officers would come to hospitals and would transfer those wounded who had come out of critical condition to prisons known only to them. No information is available about those who were lost without a trace. The families of such lost persons are constantly under pressure not to give interviews to anyone. I know of at least three four extra security prisons.

I suffered a lot mentally and psychologically after the events of November. Many of my colleagues were arrested. They were put under pressure to remain silent. Some  colleagues abandoned their service and ran away as their resignations were not accepted.